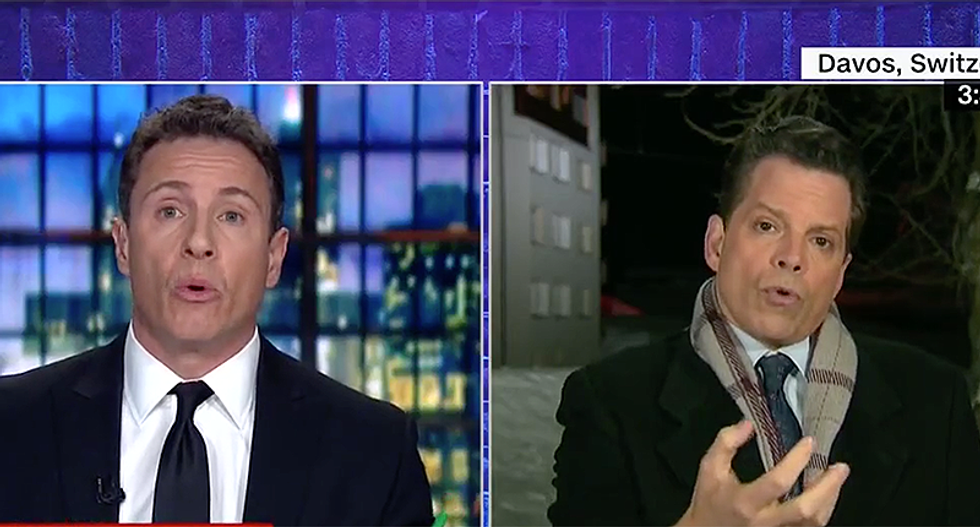 In a bizarre interview with CNN's Chris Cuomo, former advisor and brief White House communications director Anthony Scaramucci demanded that Steve Bannon's phone records be investigated because he thought the former Breitbart CEO was behind a shocking leak that came out Thursday.

"I find it very ironic that this information is coming out while [Donald Trump] is here in Davos while he's had great fanfare," Scaramucci said. "Between you and me I would like to get a look at somebody like Steve Bannon's phone records to see who he's talking to and how this information is out there."

The story from The New York Times revealed that Trump sought to fire special counsel Robert Mueller but White House counsel Don McGahn threatened to quit if it happened. Scaramucci also claimed that the story was completely irrelevant because Trump never did fire Mueller, which Cuomo quickly pounced on.

"Don't say that the information can't be believed because of the timing," Cuomo said. Scaramucci cut in to say that it wasn't that he doesn't believe the reporting, rather that it was suspect.

Scaramucci said that the conversion was a "privileged conversation" and thus shouldn't have been released to begin with. The White House counsel doesn't have executive privilege with the president as found by the U.S. Supreme Court during the investigation into President Richard Nixon.

The two argued about whether or not it was important before returning to the issue of Bannon, where Scaramucci backtracked.

"This distraction is about leaks and Steve Bannon," Cuomo said.

"You don't want to let me finish because you know I'm making a lot of sense to your viewers," Scaramucci alleged. "The guy was never fired."

"You're saying it was leaked by Bannon," Cuomo said.

Cuomo clarified that it wasn't what the reporting was about. The conversation devolved from there.