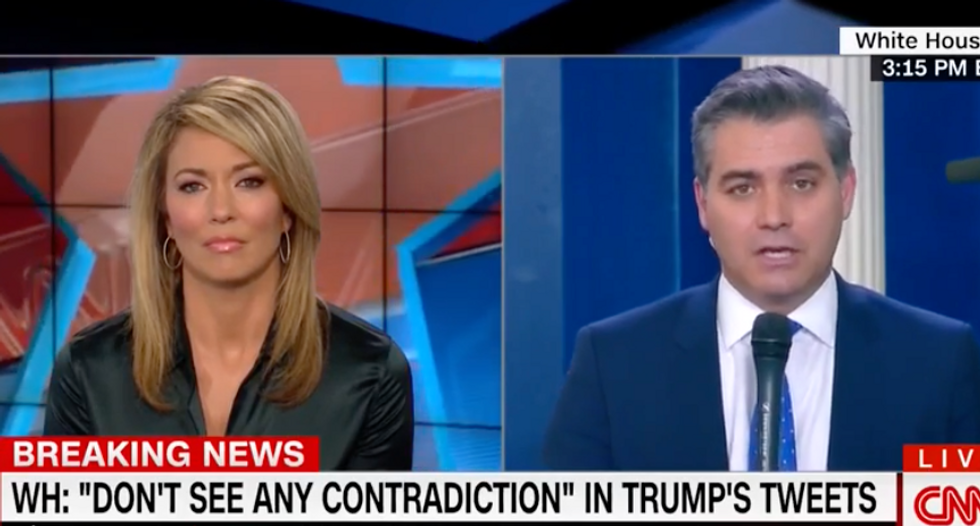 CNN’s Jim Acosta and Brooke Baldwin on Thursday slammed the White House for trying to convince reporters “two plus two does not equal four,” after press secretary Sarah Huckabee Sanders insisted contradictory tweets by Donald Trump did not sow confusion in Washington, D.C.

Trump on Thursday seemed to cast doubt over the reauthorization of the Foreign Intelligence Surveillance Act (FISA)—which the House voted on this afternoon—after he tweeted it was used to "badly surveil” his campaign during the 2016 presidential election. Shortly after that, Trump urged lawmakers to “get smart” and vote in favor of reauthorizing FISA.

In a tense exchange with NBC’s Hallie Jackson, Huckabee Sanders said the president’s contradiction wasn’t “confusing to me, I’m sorry if it was for you.”

“Here is the reality: it did create confusion,” Baldwin said after playing that exchange. “It just did.”

“Lawmakers said so themselves, including Republicans,” she continued. “Republican Mark Meadows (R-NC) said it gave everyone pause. Democrats begging Republicans to delay the vote because of the president's tweets this morning.”

“It just was confusing,” Baldwin later said, turning to Acosta. “The tweet was confusing this morning, she’s obviously saying it's wrong.”

“Those were contradictory tweets this morning from the president on the FISA program—tweets, by the way, which were posted at around the same time he was watching Fox and Friends essentially tell him, no, Mr. President don't do this,” he continued. “And so, it raises the question … does the president essentially livetweet his policy after watching a television program? That should cause concern to people when wondering what the president is up to on any given morning. It appears this morning he was watching a program and then tweeting policy. that obviously caused a lot of concern up on Capitol Hill, caused a lot of concern at the White House.”

“We just know that,” Acosta explained. “Yet we have the White House Press Secretary Sarah Huckabee Sanders essentially telling us that two plus two is not four and the sky is not blue.”

Watch the clips below, via CNN: