Don Lemon unleashes his own attack on Trump and his supporters: 'If you know you're not a racist -- why are you mad when we call it out?' 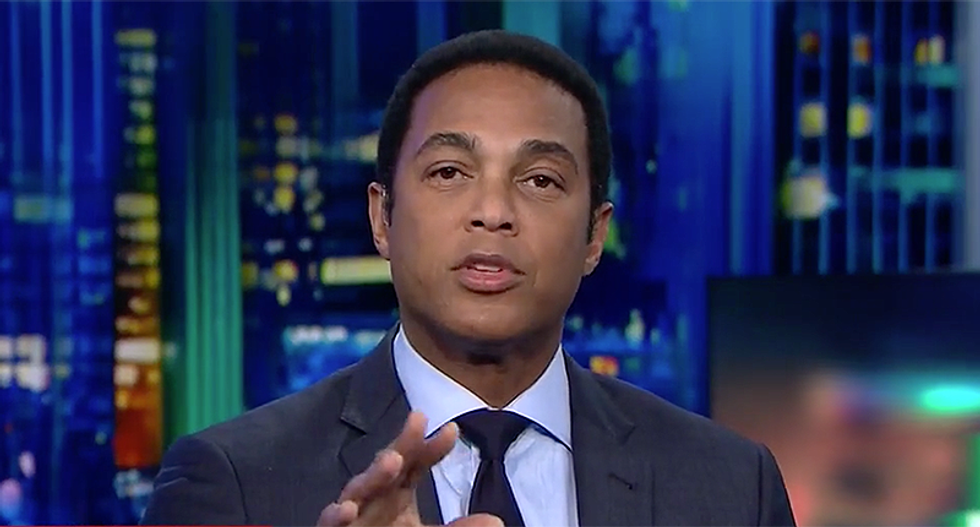 CNN host Don Lemon is tired of being outraged. Although, the reality is Lemon said that he isn't that outraged, rather he knows that President Donald Trump is a racist.

In a commentary that opened his Thursday show, Lemon slammed the comments, but also those who still continue to stand with Trump despite his racism.

"The president of the United States is racist," Lemon began. "A lot of us already knew that. Today President Trump, talking with lawmakers in the oval office office about immigrants from Haiti from El Salvador and Africa, said, 'Why are we having all these people from sh*thole countries come here?' But you know who he did say he would welcome here? He said, the U.S. should bring in people from more countries like Norway. He went on to say, 'Why do we need more Haitians, take them out?' Those comments are frankly disgusting. There's other language a would like to use, but we are on television."

However, the comments don't come as a shock, because it's who Trump has showed himself to be, according to Lemon.

"Apparently we have to go through this repertoire every time he says something like this," he continued. "This is a man who, in an Oval Office meeting last year said Nigerian immigrants should go back to their huts. All Haitian immigrants have AIDS. The man who based his entire political career for years on the racist birther lie that President Barack Obama was born in Africa. A man who reportedly still believes that to this day. He started his campaign trashing Mexicans. He responded to white supremacists who killed a young woman in Charlottesville, claiming there were 'very people on both sides.' The man who responded to protests by black NFL players by calling them sons of bitches. This is a man who today complained about immigrants who 'Are from sh*thole countries.'"

When asked about the comments a White House official told CNN that it was good for them and that it'll resonate with Trump's base.

"Jesus," was all Lemon could respond. "Admitting that for all their talk about making America great, the president is playing to a base that welcomes his racism and will enjoy it. That is disgraceful. With that said, here's what's worse and probably the most important point. This is for anyone who may be taken aback by my comments. I want to be clear here, I don't care if you are. I hope you are. For years now, it's been two and a half years since he officially entered the political arena. For years, I and others have been trying to tell you, the American people, that this man was exhibiting bigoted behavior. I asked him about it a number of times but he denied it. Kept up the racist rhetoric during the campaign and now in the White House. His supporters continue to make excuses for him. Some of them I know. Some of his friends I can hear them telling me 'Oh, Don, he didn't mean that. It was taken out of context, I'm not sure.' He is a racist, for all of you who have uttered that tired, lazy, uninformed, uninformed, uneducated ignorant response of calling me and others racist behaviors, you know what you can go do? I can't say that, but you can read a book