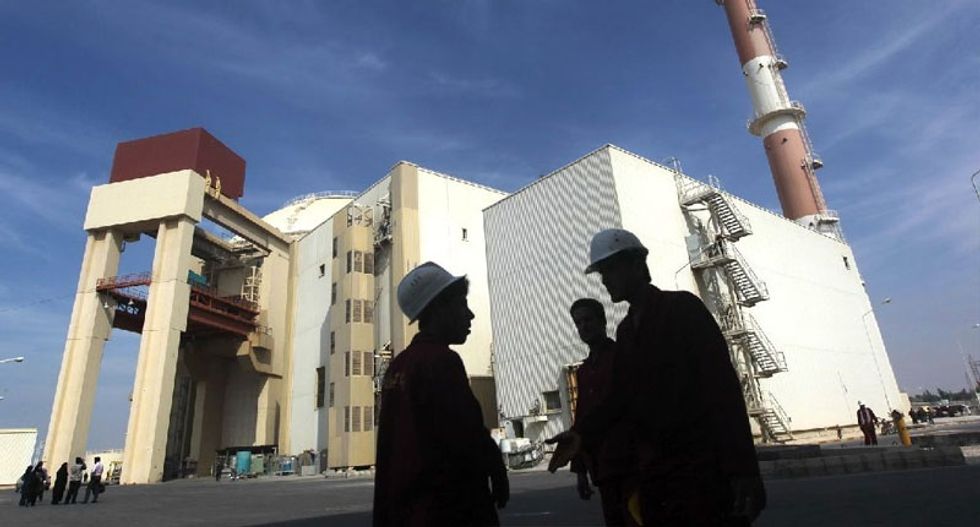 The European Union and the foreign ministers of Britain, Germany and France put on a united front to defend the accord after talks in Brussels with Iranian Foreign Minister Mohammad Javad Zarif.

Trump, who has repeatedly condemned the deal and in October refused to certify Iran was complying with it, is expected to decide on Friday whether or not to reimpose sanctions against Tehran that were suspended under the deal.

"The deal is working, it is delivering on its main goal which means keeping the Iranian nuclear programme in check," Mogherini said, stressing the importance of preserving an agreement she said is "making the world safer and... preventing a potential nuclear arms race in the region".

Senior officials have told AFP they "expect" Trump to extend waivers on nuclear-related sanctions on Iran Friday to keep the US in line with the agreement, though he is also expected to impose fresh measures against Iran over human rights abuses and support for foreign extremist groups.

The EU and other world powers have repeatedly warned it would be a mistake for anyone to abandon the deal, thrashed out with Iran over 12 years by the US, Britain, France, China, Germany and Russia.

UN inspectors have certified Iran's compliance with the deal nine times, most recently in November, and French Foreign Minister Jean-Yves Le Drian said there was "no indication" Tehran was not keeping its side of the bargain.

"It is important now that all parties respect this joint commitment and that our American allies respect it as well," Le Drian said.

Iran has said that if the US walks away from the agreement, it is ready to give an "appropriate and heavy response".

Zarif took to Twitter after the Brussels meeting to warn that "Iran's continued compliance conditioned on full compliance by the US".

The Iranian said there was a "strong consensus in Brussels today" that Iran was complying with the deal and that "any move that undermines (the agreement) is unacceptable."

One of the criticisms levelled at the nuclear deal is that it does nothing to address Iran's continuing ballistic missile programme and meddling in Middle East conflicts such as Yemen and Syria.

The Europeans say these issues should be kept separate from discussion of the nuclear deal, but in a nod to US concerns, Mogherini stressed they were raised with Zarif at Thursday's talks.

She said they had also brought up "internal recent events" in a reference to anti-government protests in Iran that left more than 20 people dead.

Johnson added that it was important for building global support for the nuclear deal that "Iran should be able to show that it is a good neighbour in the region" and show what it can do to help solve the Yemen crisis.

German Foreign Minister Sigmar Gabriel even indicated that Iran had agreed to open talks about regional issues, starting with Yemen.

Mogherini, who played an important role in crafting the nuclear accord, has vowed to preserve the deal and has lobbied US lawmakers in Washington.

US Congress is working on a way to punish Iran for the ballistic missile programme and its interference in Middle East conflicts such as Yemen and Syria.

The 28-member EU has condemned the "unacceptable loss of human lives" in the protests and stressed that peaceful protest and freedom of expression are "fundamental rights".