FLASHBACK: Paul Ryan tells undocumented mom she shouldn't be deported — and promises not to 'pull the rug' from under her 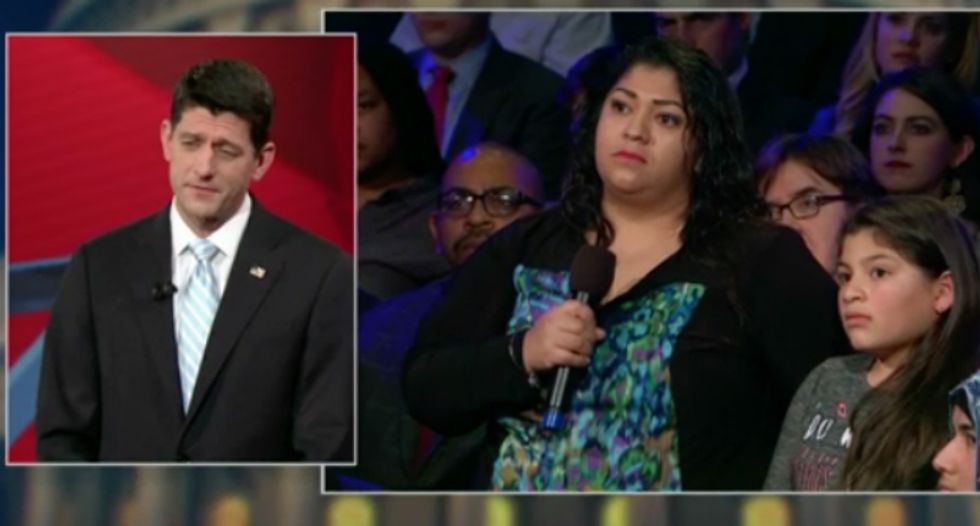 Rep. Paul Ryan (R-WI) tells an undocumented mother she and her child shouldn't be deported during a January 2017 town hall meeting. Image via screengrab.

As the debate about what Congress and the White House will do with the Deferred Action for Childhood Arrivals program roils, a comment made by House Speaker Paul Ryan (R-WI) just before President Donald Trump's inauguration to an undocumented mother seems all the more cruel.

In a town hall meeting on January 12, 2017, an undocumented woman named Angelica explained that she was brought to the United States illegally at age 11. As she stood with her daughter, she asked the House speaker if he thought she and her family should be deported, to which he quickly responded "no."

"I can see that you love your daughter and that you have a nice future ahead of you," Ryan told the woman and her daughter. "And I hope your future is here."

The congressman went on to say that "our incoming president" wants to focus on other immigration matters, not "this," presumably referring to people like Angelica who are undocumented but have lived in the United States since they were children.

"What we have to do is find a way to make sure that you can get right with the law," Ryan continued,  "and we’ve got to do this so that the rug doesn’t get pulled out from under you and your family gets separated."

"That’s the way we feel," he said. "And that is exactly what our new, incoming president has stated he wants to do."