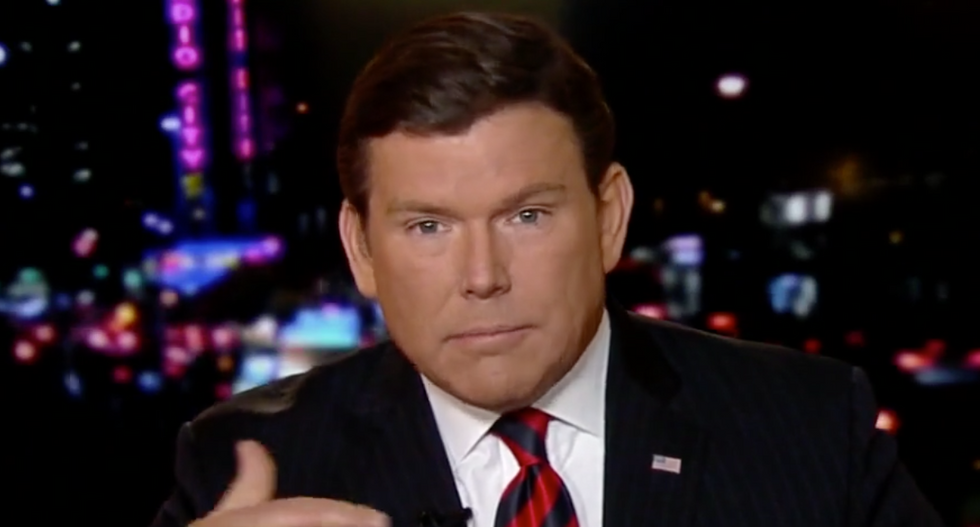 Bret Baier, anchor of the Fox News program Special Report, said on Tuesday that it had been over 500 days since President Donald Trump was interviewed by a professional journalist at his network -- even though the president often talks to Fox News hosts like Sean Hannity.

Baier insisted that the "news side" of Fox was in the "same boat" as all other outlets when it came to getting interviews with the president.

"The opinion side of Fox News does not have a problem getting interviews," Baier explained. "But my requests, Chris Wallaces' request for an interview with the president has not been answered. I last interviewed candidate Trump almost 500 days ago and have asked every week since for an interview, sometimes twice a week."

Baier said that Trump has repeatedly promised that an interview "is going to happen very soon."

Baier took a shot at rival network CNN, which has been known to fact check Trump in real time by adding graphics to the screen.

"That's not what we do," Baier said. "But we do do stories where we point out the factual inaccuracies, what's true, what's not about what was said."

But he noted that the "news side" of Fox resists calling the president's statement's lies because the "motivation behind it" is not known.

"The problem sometimes is that Fox gets painted with a broad brush and Sean Hannity's show is not Special Report," the Fox News anchor opined. "I think Sean Hannity, for what -- his opinion, he does an amazing job with bringing forward his thoughts on things."

"You have to watch my show, the news side, three times and then let me know if we cover it fairly," he stated.

Viewers, however, could be forgiven for thinking that Fox News was chiefly defined by its opinion shows because the so-called "news side" is relegated to non-primetime slots.

For example, Trump's favorite times to watch Fox News are between the hours of 6 a.m. and 9 a.m. in the morning and between 7 p.m. and 11 p.m. in the evening. The so-called "news side" of Fox broadcasts no shows during the hours that the president is most likely to watch.