'Free press is the despot’s enemy': Jeff Flake destroys Trump from the Senate floor for 'battering' the truth 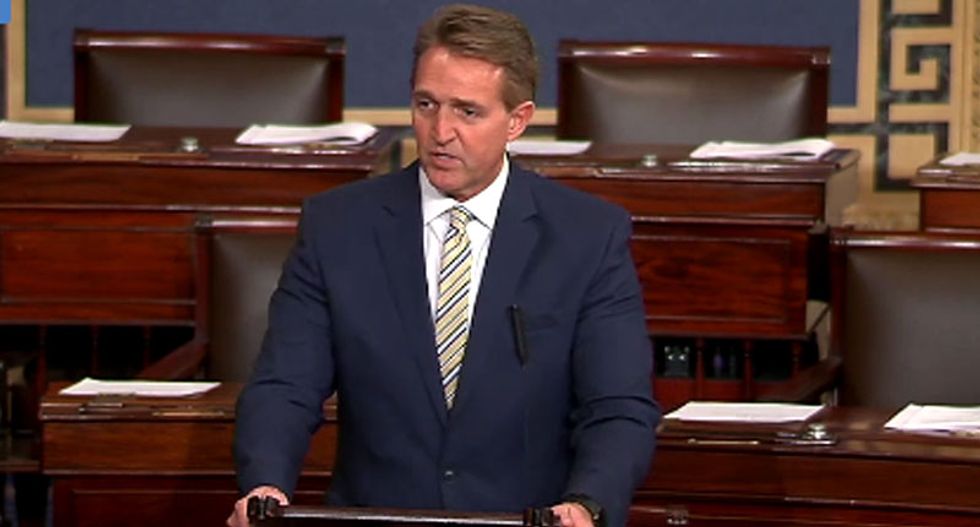 Flake compared Trump to former Soviet communist dictator Josef Stalin over his attacks on the press.

"I rise today to talk about truth's relationship to democracy," Flake said.

The senator said that objective truth had been "battered" over the past year, with help from "the most powerful person in our government."

"Mr. President, it is a testament to the condition of our democracy that our own president uses words infamously spoken by Josef Stalin to describe his enemies," he said. "It bears noting that so fraught with malice was the phrase 'enemy of the people,' that even Nikita Khrushchev forbade its use, telling the Soviet Communist Party that the phrase had been introduced by Stalin for the purpose of 'annihilating such individuals' who disagreed with the supreme leader."

Flake added that "free press is the despot’s enemy."

"No president will even have dominion over objective reality," he continued, saying that Trump was "charting a very dangerous path" with his inability to withstand criticism.

At least three people including an adolescent girl were killed and 11 others wounded Friday when a 16-year-old shooter opened fire on two schools in southeastern Brazil, officials said.

Authorities in the town of Aracruz, in Espirito Santo state, said the shooter had opened fire on a group of teachers at his former school Friday morning, killing two people and leaving nine others wounded.

Russian shelling of the southern Ukrainian city of Kherson killed 15 civilians Friday, officials said, as engineers across the country sought to restore heat, water and power to major cities.

Throughout the country, Russian air strikes in recent weeks have brought Ukraine's energy infrastructure to its knees as winter approaches and temperatures near freezing, spurring fears of a health crisis and a further exodus.