'Get out of the country!': Navajo lawmaker harassed by Arizona Trump supporters accusing him of being here 'illegally' 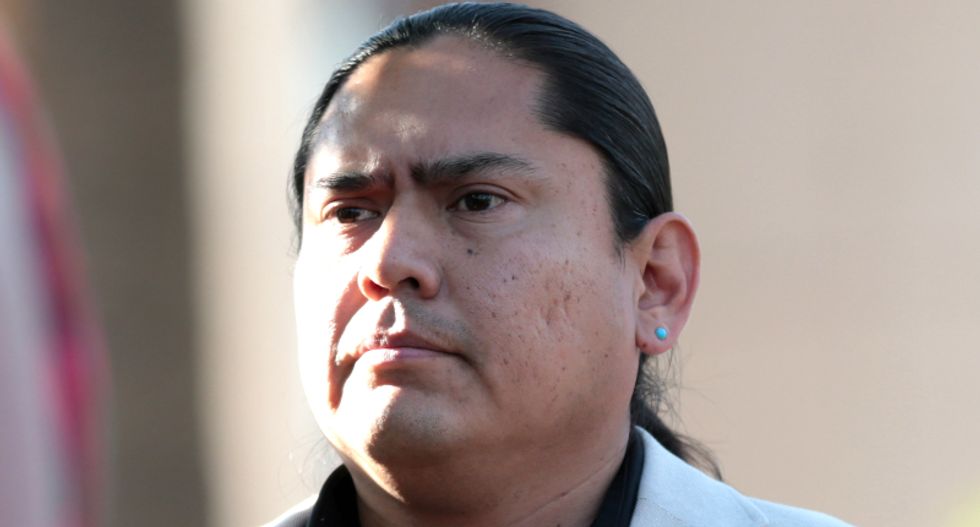 "Supporters of President Donald Trump singled out dark-skinned lawmakers, legislative staffers and children at the Capitol on Jan. 25 as they protested congressional efforts to pass immigration reform, according to staffers of the Arizona Legislature and two Democratic legislators, AZ Capitol Times reported. "Waving large flags in support of Trump while standing between the House and Senate buildings, the protesters, who were also armed, asked just about anyone who crossed their path if they 'support illegal immigration.'”

One dark-skinned Arizonian who was asked if he was in the country "illegally" was Rep. Eric Descheenie (D-Chinle).

Rep. Descheenie is a Navajo lawmaker.

“I’m indigenous to these lands,” Rep. Descheenie said. “My ancestors fought and died on these lands. I just told them, ‘Don’t ask me that question.’”

Legislative staffers Lisette Flores and Selianna Robles had gone to a local farmers' market for lunch and were also accosted.

“We’re walking back, and they start yelling again, ‘Get out of the country.’ At that point, they pointed to Lisette, called her an illegal, and said, ‘Get out, go back home!’” Robles said. “But they pointed at Jane (Ahern), who works for the House, and they said, ‘No, you can stay.’”

“They assume things about you. There’s not much we can do,” said Robles, an Arizona native raised in the town of San Luis. “We work for the state, we’re public servants, and we’re just here to do our job.”

The Democratic leader of the state Senate blasted the "unacceptable" response by law enforcement after officers were allegedly instructed to stand down.

“I can tell you that the Democratic staff who were yelled at by the protesters and called illegals definitely felt harassed and were not satisfied with the response,” Senate Minority Leader Katie Hobbs (D-Phoenix) wrote in a letter to Senate President Steve Yarbrough (R-Chandler).

“They did not feel safe," Rep. Hobbs noted.

“This is a public place. When armed protesters aggressively go after members, staff and visitors, there needs to be a response that ensures the safety of everyone involved,” Rep. Hobbs wrote. “I have seen instances here at the capital (sic) when peaceful protesters with a different agenda were surrounded by many more law enforcement officers with a much more aggressive response.”