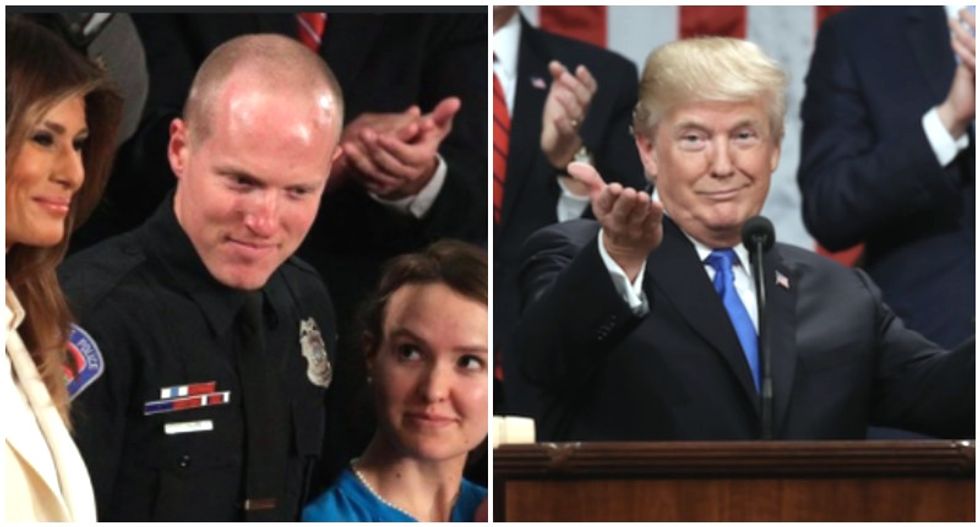 President Donald Trump praised a New Mexico police officer in his State of the Union address for adopting a heroin addict's baby -- but a historian noticed some disturbing parallels in the anecdote.

The president highlighted Albuquerque police officer Ryan Holets, who while on duty in September encountered a pregnant, homeless woman as she prepared to inject heroin.

"When Ryan told her she was going to harm her unborn child, she began to weep," Trump said. "She told him she did not know where to turn, but badly wanted a safe home for her baby. In that moment, Ryan said he felt God speak to him: 'You will do it -- because you can.' He took out a picture of his wife and their four kids. Then, he went home to tell his wife Rebecca. In an instant, she agreed to adopt. The Holets named their new daughter Hope."

"Ryan and Rebecca: You embody the goodness of our nation," the president added. "Thank you, and congratulations."

Historian Angus Johnson couldn't help but notice the contrast between the language Trump used to tell that story and his rhetoric against Latino and other immigrants brought to the United States as children.

"In the context of the full speech, of Trump's presidency, this story is a question and an answer," Johnson tweeted. "What do we do with the children of those we despise? If they're brown, we expel them from our land. If they are white, we take them for ourselves."

In the context of the full speech, of Trump's presidency, this story is a question and an answer: What do we do wit… https://t.co/JGAWsY6HeY
— Angus Johnston (@Angus Johnston) 1517405617.0

The City University of New York professor paid attention to the details Trump's speechwriters chose to omit from Holet's story, and those they chose to highlight.

"We don't know what process was followed in this adoption," Johnson said. "We don't know where the mother of this child is now, how she's doing, what her relationship with her kid is. Trump's people could have said. They chose not to. They chose to erase her."

Johnson drew a parallel between the presidential anecdote and the history of los desaparecidos — or, the disappeared -- Argentinians who vanished after a military junta took over in 1974, and many of the political prisoners' babies were stolen and given to party loyalists.

"The children of subversives were seen, (historian Marguerite) Feitlowitz explained, as 'seeds of the tree of evil,'" reported New York magazine. "Perhaps through adoption, those seeds could be replanted in healthy soil."

Johnson pointed out the baby's mother was still homeless as of December and not in contact with her child or the adoptive family -- and the historian was disturbed by the way Trump wrote the woman out of her own story.

"That erasure wasn't accidental," Johnson said. "It wasn't merely rhetorical. It was ideological. It was an expression of a specific kind of ethno-natalism we've seen before. It was fascist."