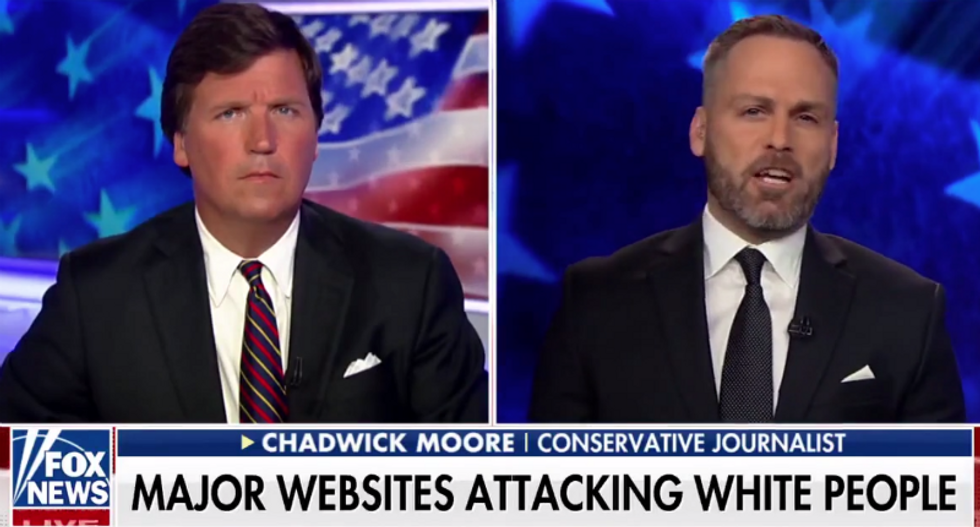 Amid all the days' insane headlines, a guest on Tucker Carlson's Fox News show Wednesday still managed to shock.

"I was having a conversation with a young, upper middle class black woman, and she was talking about how badly she gets treated on the street here in New York, and I said to her, 'what if you lived for one day as a white woman and you were treated the exact same way and people were just as rude to you? What then?'" Moore said.

"Tucker Carlson guest literally says he told a black woman who experienced racism that she should walk a mile in a white womans shoes before passing judgement," Media Matters' researcher Andrew Lawrence tweeted with the video. "I just can't."

"Quite reasonably, you’ll assume that his comments can’t be worse than the chyron, but then you’ll listen to them," The Black List founder Franklin Leonard tweeted, referencing the chyron that touted news of "Major websites attacking white people."

Quite reasonably, you’ll assume that his comments can’t be worse than the chyron, but then you’ll listen to them. https://t.co/MAbTNryagf
— Franklin Leonard (@Franklin Leonard) 1515031690.0

Check out the best responses below.

This type of content shows why Tucker is so popular with the white supremacist crowd cc @gaywonk https://t.co/WG3d3lrxLI
— Matthew Gertz (@Matthew Gertz) 1515031847.0

if two guys on Fox News named Tucker and Chadwick can't convince you that white people have it rough, then https://t.co/cjciybYvhb
— Simon Maloy (@Simon Maloy) 1515031603.0