WATCH: Internet loses it after ‘very stable genius’ Trump appears to forget the words to the national anthem 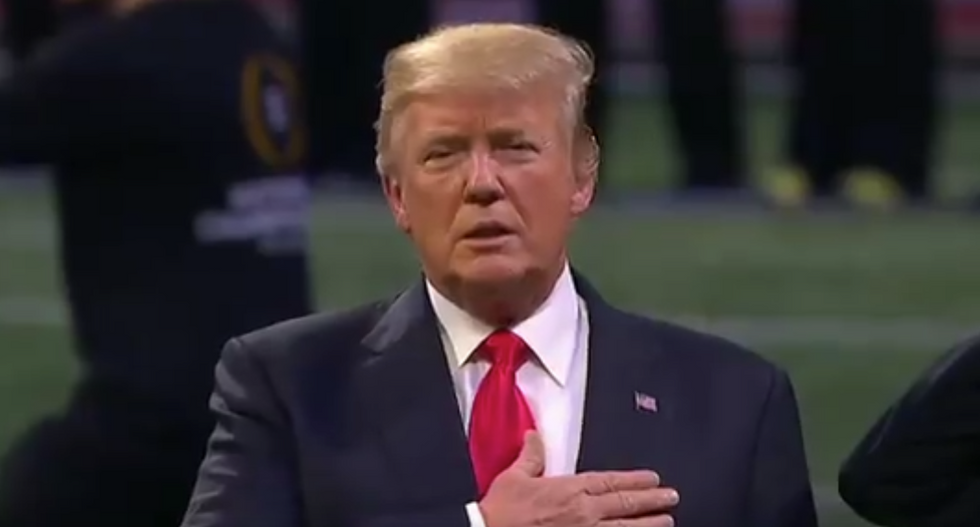 Donald Trump on Monday took the field at the 2018 NCAA Football National Championship during the singing of the national anthem—and appeared not to know all the words.

Trump, who received boos from the crowd during his appearance at the Georgia vs. Alabama game, has made the national anthem a staple of his presidency, leading the charge against sports players who take a knee during the tune.

The irony of Trump’s apparent inability to sing the very anthem he claims to champion was not lost on the Internet.

Read some of the best reactions below:

Trump’s next speech should be him having to recite all the words to the National Anthem without a TelePrompTer. He… https://t.co/a0mp5YUJFn
— Dana Goldberg (@Dana Goldberg) 1515461007.0

Of course the Donald that demeaned black and white athletes for understanding the true meaning of our National Anth… https://t.co/RAGcTLOfmk
— Tom Perriello (@Tom Perriello) 1515460974.0

Just fell out of my chair and kept rolling for several yards upon being presented with evidence that Trump may not… https://t.co/KoUaeO1c51
— Patrick Monahan (@Patrick Monahan) 1515461257.0