Jake Tapper delivers perfect rebuttal to Trump's book threat: He wants to block it because it 'hurts his feelings' 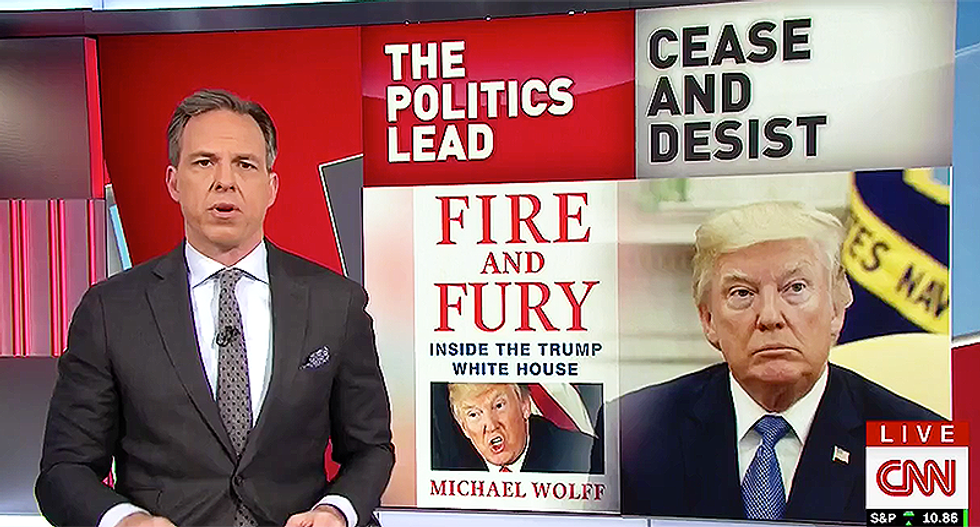 Thursday afternoon, press secretary Sarah Huckabee Sanders call out Michael Wolff new book Fire and Fury: Inside the Trump White House during her briefing and President Donald Trump has threatened a libel lawsuit. There's just one problem: The White House cooperated with the book's author and the book's publication.

Trump's cease and desist letter doesn't exactly hold water, according to CNN's Jake Tapper, because there were some 200 interviews with people in the White House. Wolff was given free range to conduct interviews for the book. Now, Trump's attacks on the book have not only given it an enormous amount of free media but it's changed the release date so the book will be released on Friday.

"The time to make that assumption was before you agreed to cooperate," Tapper said about Sanders' attack on Wolff from the podium. "It's worth pointing out that Michael Wolff spent months listening and taking notes and recording and watching from West Wing couches at the invitation of -- or at least, as he says -- the non-disapproval of President Trump himself."

Trump has not only threatened to sue Wolff but Steve Bannon as well, who had some notably disparaging comments. The problem with a lawsuit, however, is that Trump will be forced to give a deposition in which a lawyer could do discovery on anything. Any question could come up that this book talks about. The lawsuit could ultimately prove how real the claims and comments actually are.

"Wolff and publisher are in good company," Tapper said about the lawsuit. Trump has "threatened to sue CNN, The Washington Post, The New York Times, the Associated Press, comedian Tom Arnold, a 92-year-old Scottish widow, David Cay Johnston, Tony Schwartz, Gov. John Kasich (R-OH), Sen. Ted Cruz (R-TX), oh, and all of the women who accused him of sexual harassment and assault. And that's just a small sampling, and those are just lawsuits because of criticisms, to say nothing of his business deals."

The history isn't behind Trump's actual action, so unless he intends to round up every person who purchased the book and hold a book burning -- nothing will stop the book's release.

"Lastly, let's all take a step back here," Tapper continued. "It's remarkable that the president of the United States is in any way trying to stop publication of a book, breaching the right of free speech and freedom of the press that we have in this country just because said speech to be candid, hurts his feelings. Not for a national security reason, in fact, from what we know about the president's furious response to this book, it seems that the quotes from Steve Bannon are what has upset him the most. The quotes."