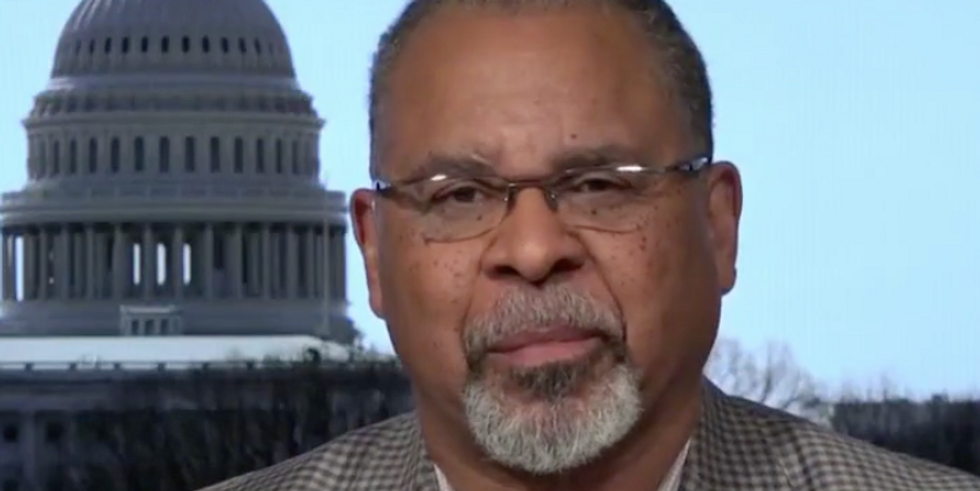 Speaking with host Alex Witt, Blackwell described working in multiple administrations and stated that he doesn't believe the president is a racist and that the media and the president's detractors are making too much of his calling Haiti and African nations "sh*tholes."

"Let's go back to the fact that one, the language that was perhaps, allegedly inartful, that was unrefined, that was vulgar, but can we remember, I do remember when Barack Obama two years ago referred to Libya as a 'ess-sheet,' er, uh, 'ess-show,'" Blackwell said.

"I would love to say we have time to go over Barack Obama," Witt said, "but we don't. I want to stay on Donald Trump right now because there's a lot to talk about with this guy."

"I know you want to isolate this, but I've watched, observed and served under several presidents," said Blackwell, "and the reality is there are times when presidents use language in private settings that have different concepts and different impacts."

Blackwell's "whataboutism" regards a comment that Obama made regarding the U.K.'s Tory government and its mishandling of Libya.

"We actually executed this plan as well as I could have expected: We got a UN mandate, we built a coalition, it cost us $1 billion -– which, when it comes to military operations, is very cheap. We averted large-scale civilian casualties, we prevented what almost surely would have been a prolonged and bloody civil conflict. And despite all that, Libya is a mess," said the former president.

But thanks to former U.K. Prime Minister David Cameron's inattention to the matter, the Arab Republic has become a "sh*tshow," Obama said.

This week, President Donald Trump reportedly called Haiti and the 54 countries of Africa "sh*thole" countries during an Oval Office discussion of immigration policy.