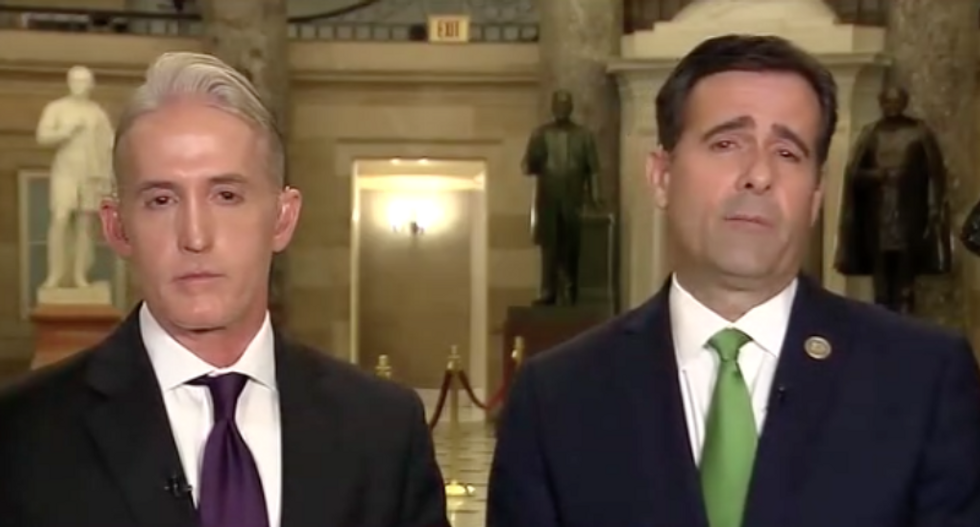 On Monday evening, two members of the House Judiciary Committee claimed on Fox News that their latest review of text messages sent between FBI agents Lisa Page and Peter Strzok included a reference to a so-called "secret society."

"We knew that Strzok and Page had an intense anti-Trump bias," Rep. John Ratcliffe (R-TX) told Fox News' Martha McCallum. "And that's OK, so long as they check it at the door and do their job. But we learned today in the thousands of text messages that we reviewed that perhaps they may not have done that."

"In the immediate aftermath of [President Donald Trump's] election, there may have been a 'secret society' of folks within the Department of Justice and the FBI, to include Page and Strzok, working against him," the congressman continued. "I'm not saying that actually happened, but when folks speak in those terms, they need to come forward to explain the context."

"The day after the election, what they really didn't want to have happen, there is a text exchange between these two FBI agents, these supposed to be fact-centric FBI agents saying, 'Perhaps this is the first meeting of the secret society,'" the South Carolina Republican said. "So I'm going to want to know what secret society you are talking about, because you're supposed to be investigating objectively the person who just won the electoral college."