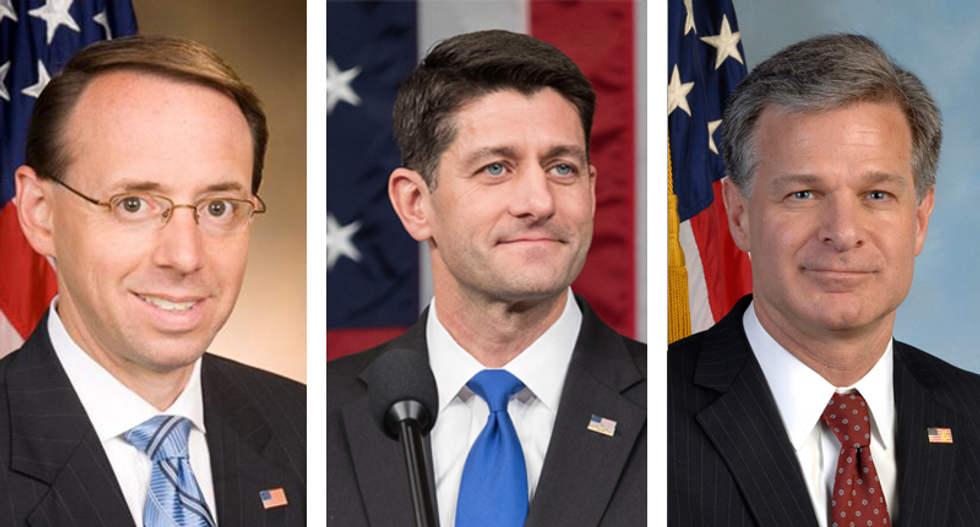 That meeting comes among a series of reports directly or tangentially related to the special counsel Robert Mueller’s Russia investigation. Rosenstein named Mueller to head the probe after Attorney General Jeff Sessions recused himself from Russia related matters.

According to a request from House Intelligence Chairman Rep. Devin Nunes (R-CA), Wednesday marks the final day for the Department of Justice and the FBI to turn over documents related to the investigation—including sensitive information regarding the infamous Trump-Russia dossier. ABC reports Nunes’ request was the basis for Rosenstein’s meeting.

Per another source familiar with the meeting: This is directly related to House intel chairman @DevinNunes's demand… https://t.co/Jk0cdQdyTN
— Kyle Cheney (@Kyle Cheney) 1515018455.0

Per his Dec. 28, 2017 letter, Nunes—who’s been accused of conducting his own shadow investigation of the FBI and DOJ during the House intel’s Russia investigation—demanded documents and testimony from FBI agents Peter Strzok and Lisa Page. Strzok was removed from the Russia investigation last year after Mueller discovered anti-Donald Trump text messages between him and Page.

“Should DIOJ decided to withhold any responsible records … it must, consistentt with the subpoena instructions, proved a written repose, under your signature, detailing the legal justification for failing to comply with valid congressional subpoenas,” Nunes’ letter warned.

“At this point it seems the DOJ and FBI need to be investigating themselves,” it added.