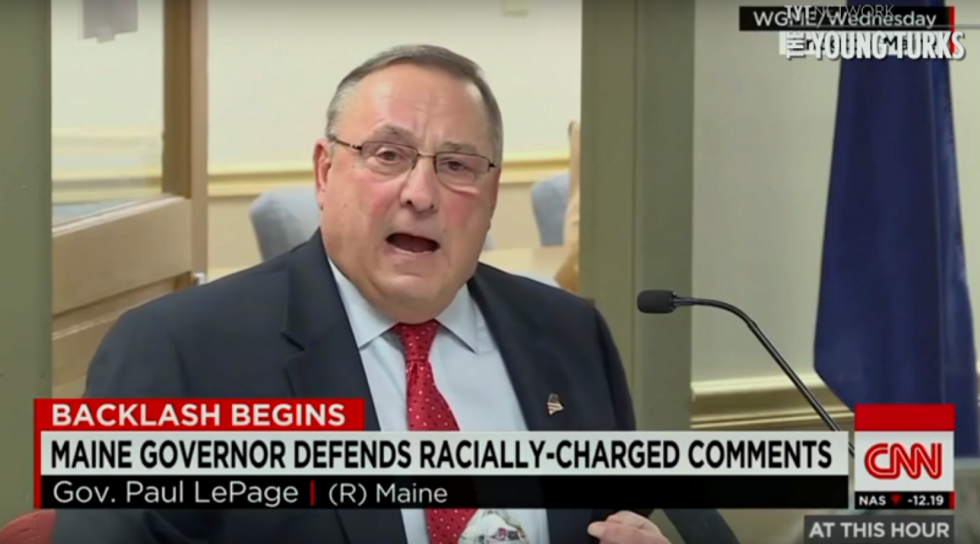 Paul LePage, the Republican governor of Maine, has sparked a new controversy in his home state by taking welfare money that's supposed to go directly to poor families and diverting it to different programs intended to help at-risk youth, including a Christian summer camp.

The Bangor Daily News reports that LePage's administration this year is spending "$1.7 million on after-school programs that once would have gone to low-income families with children in the form of cash assistance." This development is particularly troubling, say critics, because it's occurring at a time when the percentage of Maine children being born into poverty is on the rise.

LePage's administration is diverting money given to the state as part of the Temporary Assistance for Needy Families (TANF) grant that it receives from the federal government to offer financial help to poor families.

In lieu of giving money directly to families, LePage's administration has funded after-school programs intended to teach kids how to avoid out-of-wedlock pregnancies, as well as an after-school program for local high school students run by Fair Haven Camps, which during the summer serves as a Christian summer camp.

It is technically legal for LePage to send money to Fair Haven Camps so long as the camp doesn't use the money to fund "inherently religious activities."

Regardless, even Samuel Hammond -- a poverty and welfare policy analyst at the libertarian Niskanen Center think tank -- believes that LePage's actions are troubling because he's treating the program like a "slush fund."

"To the extent that Maine has diverted money that’s earmarked for poor people and for cash assistance to other things and treated it like a slush fund, it actually harms the longer-term conservative project of federalism," he tells the Bangor Daily News. "It signals that the state is not a credible steward of federal money."

Will it be Norway's banana-eating wolves, France's coven of witches or Britain's space man?

Or maybe a Greek with a death wish, a slinky Lithuanian chanteuse with a jet-black bowl cut or a Serbian germaphobe?

A pair of green groups on Thursday appealed the U.S. Postal Service's rejection of a Freedom of Information Act request seeking to uncover details about the mail agency's contract to purchase more than 160,000 new delivery trucks, 90% of which are expected to be gas-powered.

"As the USPS forges ahead with its ill-conceived and controversial decision to pollute communities across the nation instead of electrifying their delivery trucks, we demand to see the details surrounding the agency's decision," said Elena Saxonhouse, managing attorney with the Sierra Club, which joined Elders Climate Action in filing the administrative appeal.

Mitchell Ferman, The Texas Tribune
After six power plants went down unexpectedly Friday — and with hot weather expected across Texas this weekend — the Electric Reliability Council of Texas on Friday evening is asking consumers to conserve electricity through Sunday.

Texans are asked to set their thermostats to 78 degrees or above between 3 p.m. and 8 p.m. this weekend and to avoid using large appliances at home during those same times.

A spokesperson for ERCOT, which operates the state’s main power grid, told The Texas Tribune he does not expect there to be electricity blackouts this weekend.