‘That’s no biggie?’ Stephanie Ruhle burns down Trump conspiracy theorist for lying about Russia ‘cover up’ 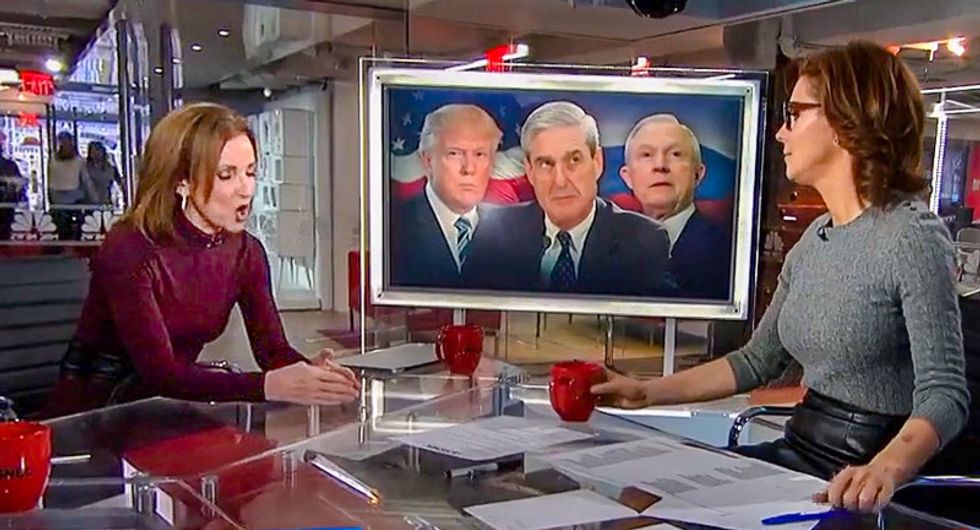 Former U.S. Congresswoman Nan Hayworth (R-NY) on Wednesday endeavored unsuccessfully to convince an MSNBC panel that President Donald Trump was not trying to influence the Russian investigation when he fired then-FBI Director James Comey and allegedly tried to cover up a meeting with Russians at Trump Tower.

"There's nothing here that has to be inevitably put together as evidence of collusion," Hayworth told MSNBC host Stephanie Ruhle. "In fact, just the opposite. The FBI under Comey and under FBI Deputy Director Andrew McCabe, [FBI agents sending anti-Trump text messages] were clearly colluding. That's the pattern."

"To believe that, you would have to believe that Donald Trump's motivation [in firing Comey] was that he was looking out for Hillary Clinton," Bash explained. "And I don't think anybody believes that. You zoom back the lens, you see three elements basically attacking the FBI, launching a war on the men and women of the FBI."

"You have the Russian intelligence services, you have the Trump organization," he continued. "And now, I'm sorry to say you have some congressional Republicans who want to defend the president even though they used to be pro-law enforcement, they used to be pro-intelligence community. That view has shifted now and they have morphed into attacking the men and women of the FBI."

Bash added: "It doesn't comport with the facts. But more importantly, it's dangerous for national security and for our country."

Ruhle noted that President Trump and the White House had lied about a 2016 meeting between the Trump campaign and Russians at Trump Tower.

Hayworth, however, would not back down.

"There's no evidence that anything substantive came of that meeting," she insisted.

"That's not what I asked," Ruhle interrupted.

"But there was nothing to cover up!" Hayworth shot back.

"Then why did they?" the MSNBC host pressed.

"They didn't cover it up!" Hayworth repeated.

"Why did they lie about what took place in the meeting?" Ruhle queried.

"It was presented as they wanted to talk about [Russian adoptions]!" Hayworth said, struggling for words while avoiding Ruhle's gaze.

"They said under the direction of the president it was a meeting about Russian adoptions," Ruhle stated. "They have since changed the story multiple times. Why would they do that?"

Hayworth responded with a frustrated gasp: "There was nothing of substance that came of that meeting."

"That's not what I asked you," Ruhle remarked.

Hayworth again insisted that Trump believed the meeting was about Russian adoptions, but Bash chimed in, reminding her that the Russian told Donald Trump Jr. that the meeting had to do with the Russian government providing dirt on Hillary Clinton.

"They didn't succeed!" Hayworth shouted, adding that the real collusion was that the Clinton campaign funded the Russian dossier about Trump and it was also used in the FBI's Russia investigation.