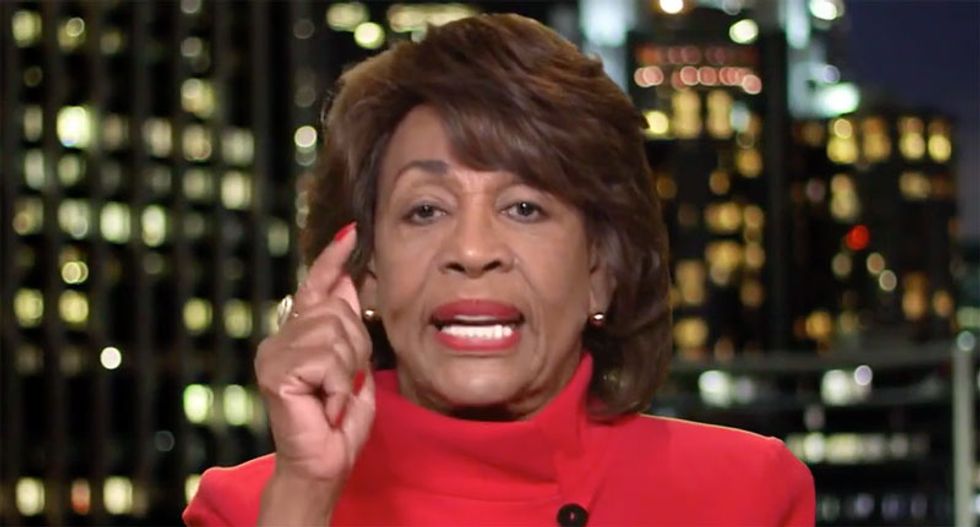 Congresswoman Maxine Waters (D-CA), the former chair of the Congressional Black Caucus, did not mince words during a Friday evening appearance on MSNBC's "All In."

Guest anchor Joy Reid, introducing President Donald Trump's "sh*thole" scandal, noted "so far the only person who's given a full account of what the president said yesterday is the one Democrat who was present, Illinois Sen. Dick Durbin, leading advocate for 'dreamers' and other immigrant groups."

"Added to what others are calling him, a moron, ignorant, on and on and on," Rep. Waters reminded.

"The United States of America is represented by the most despicable human being that could possibly ever walk the earth," Waters suggested.

"What more do we need to see or hear from this racist man?" Rep. Waters asked. "And for all of those Republicans on the other side who stand with him, who claimed to have been patriotic, they are not patriotic. They are weaklings with not the guts to stand up, or they join him as racists."

"And so, I have known this, and I've called for his impeachment over and over again," Rep. Waters reminded.

"This man has obstructed justice right before our very eyes," Waters charged. "I simply believe that not only has he colluded, and of course he has obstructed justice, but his character is such that the United States and the citizens of this country, rather, should not be willing to tolerate."

"Well, evidently he is not a real leader," Waters concluded. "And I wish I could say he didn't have the courage of his convictions, because I don't know if he has any."

"But I know this: history will not be kind to him, to these Republicans, and to those who are basically standing by him, embracing him. As far as I'm concerned, they're confirming that they're just as bad as he is," Waters explained. "He's not doing his job, we need to get rid of him also."

Reid also asked if Congresswoman Waters would be attending Trump's State of the Union address.

"What does he have to say that I would be interested in? I don't trust him, I don't appreciate him and I wouldn't waste my time sitting in that house listening to what he has to say," Waters explained. "He does not deserve my attention."