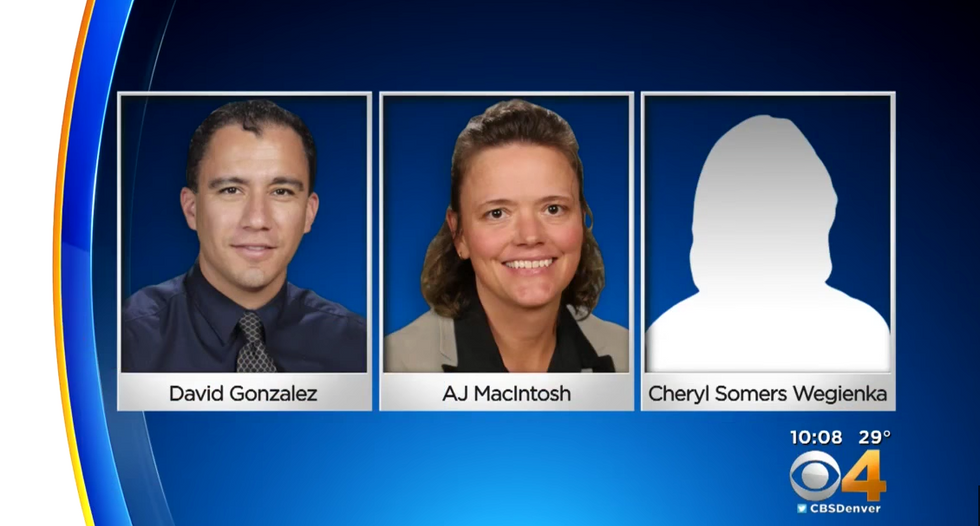 Three school administrators in Denver, Colorado were charged Wednesday with failing to properly report child abuse after they suspended the 14-year-old student who claimed a teacher had assaulted her, Denver 7 reports.

Former Prairie Middle School teacher Brian Vasquez was charged in August with 31 felony counts including sex assault on a child by a person in a position of trust. Now, police say one student who reported the claim to Prairie Middle School Principal David Gonzales and Assistant Principal AJ MacIntosh was later told “to recant her disclosure of sexual abuse by Vasquez.”

According to the indictment, the school administrators tried to "impress upon her the devastating effects her disclosure would have on his career and family,” causing the young girl to later tell them she “made up her disclosure.” She was suspended from school as a result.

Four years later, Vasquez admitted to sending lewd photographs to an underage girl, and to “having unprotected sex with another in that same year,” Denver 7 reports. The former social studies teacher told police he "understood the relationships were illegal and he was waiting for the time when they were all revealed,” according to the police affidavit.

According to the indictment, MacIntosh was, in her grand jury testimony, ”generally aware of the District's expectations regarding the immediate reporting any allegations of sexual abuse.”

“She nonetheless believed it was her individual responsibility to conduct her own personal investigations of allegations of impropriety of any type on the part of school staff, before complying with her obligations under the law,” the indictment reads.

"MacIntosh further claimed that she could not remember her involvement in any aspect of the disciplinary process resulting in CV's suspension from school, even when presented with official documentation from the school district bearing her signature, and confirming her presence,” the indictment alleges.

Former Prairie Middle School counselor Cheryl Somers-Wegienka is also charged for her role in the cover-up.

In a letter addressed to parents, the Cherry Creek School District explained the circumstances surrounding the indictments, but cautioned members of the school district to remember “none of [the administrators] have been convicted of any crime.”

"This letter is to inform you that two Prairie Middle School administrators, Principal David Gonzales and Assistant Principal A.J. MacIntosh, have been placed on leave pending the outcome of legal proceedings related to charges for failing to report child abuse,” the letter reads. “Former school counselor Cheryl Somers, who no longer works for the district, has also been named in the legal proceedings, all of which stem from a grand jury investigation. We will continue to cooperate fully with law enforcement in this matter. It is important to note that at this time none of these three have been convicted of any crime.”

Watch the report below, via CBS Denver:

An Alaska lawmaker was removed from the state's discrimination board after defending a license plate with the text, "3REICH," a reference to Nazi Germany.

According to The Washington Post, as most of the state's lawmakers condemned the license plate, Jamie Allard, a member of the Anchorage Assembly who also serves on the commission designated to investigate discriminatory complaints, argued otherwise.