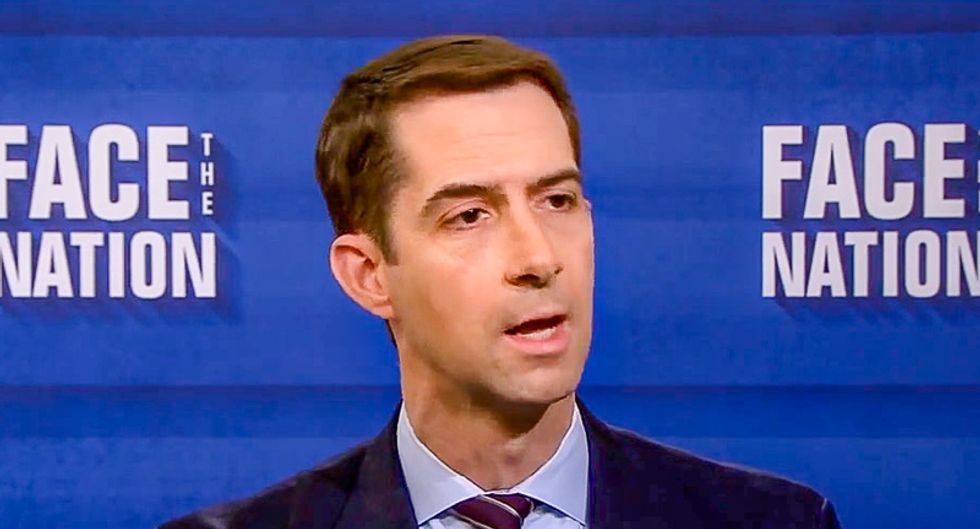 Sen. Tom Cotton (R-AR) on Sunday defended President Donald Trump against accusations that he used a racist slur to describe African countries, and he suggested that Sen. Dick Durbin (D-IL) regularly lies about things said in the Oval Office.

While speaking to Cotton on CBS' Face the Nation, host John Dickerson pointed out that Durbin had personally heard Trump use the term "shithole" to refer to African nations, and that other senators had also been told about the remarks by people who were in the room.

"You didn't hear the word or it was not said?" Dickerson interrupted. "Because [Sen. Linsey Graham] also told [Sen. Tim Scott], your Republican colleague, that this is what happened. [Sen. Jeff Flake] was in a subsequent meeting where he was told by people in the meeting this happened."

"You're saying it did not happen or you just don't remember?" the CBS host asked.

"I didn't hear it," Cotton shrugged. "And I was sitting no further away from Donald Trump than Dick Durbin was. And I know what Dick Durbin has said about the president's repeated statements is incorrect."

"So, is the senator lying," Dickerson pressed.

"Sen. Durbin has misrepresented what happened in White House meetings before," Cotton opined. "And he was corrected by the Obama administration."

Cotton went on to complain that the immigration system is broken and "un-American" because it allows families to stay together.

"The president reacted with pretty tough language because we want to move to a system that treats people for who they are," the Arkansas Republican remarked. "Today, we have a system that rewards ties of blood, ties of kin, ties of clan. That's one of the most un-American immigration systems that I can imagine."