Trump evangelicals tell MSNBC: His racism is 'contrary to Christ' but he can still help 'criminalize abortion' 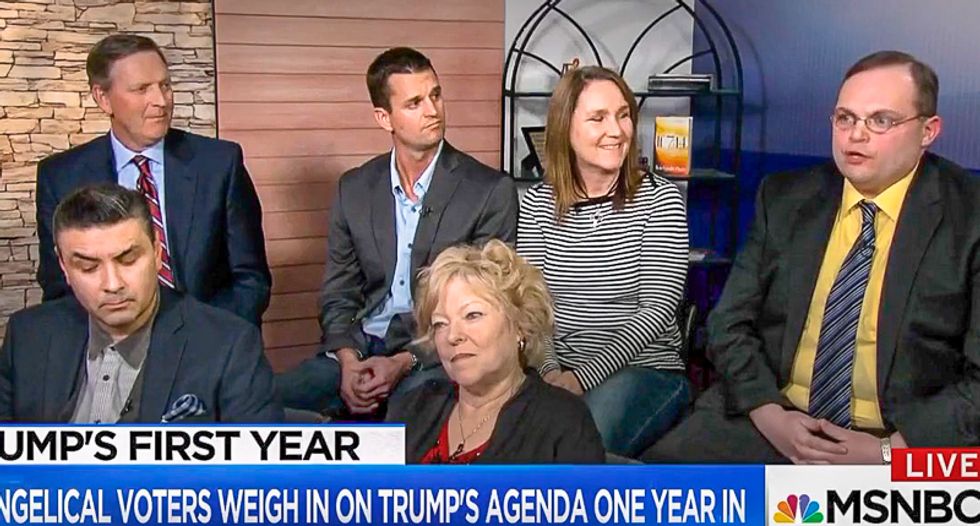 MSNBC on Thursday talked to yet another panel of Trump voters who said that they still support the president even though he has a tendency to do things that are "contrary to Christ."

In a segment that aired on Thursday morning, the group of evangelical activists who MSNBC spoke to were largely supportive of the president, although they cited some troubling "character" issues.

"I think he's doing really well in policy," Pastor Ryan Jorgenson of Harvest Bible Chapel said. "But the character is an issue at times."

"For instance, what was said in the office [using the term 'shithole' to refer to African nations], that is contrary to what Christ would stand for in the Bible and what Christians would be about," the pastor added.

Conservative activist Steve Deace observed that ongoing White House controversies had pushed some evangelicals to the point "where they are beginning to not care."

Deace said that if he could give the president advice, he would "appeal to his vanity."

"I would tell him, 'You're not serving your ego well,'" Deace remarked. "Go outside of the beltway, do more rallies, connect more with actual everyday people, the people who put you in the White House."

Bob Vander Plaats of The Family Leader called on Trump to pass a religious liberty law allowing Christian to discriminate against LGBT people.

"If I own a venue and I believe marriage is between one man and one woman and a gay couple says, 'I want to get married,'" Vander Plaats opined. "And that owner says, 'Not at this venue.' Because we don't celebrate that."

Jorgenson said that he hopes Trump will help states "criminalize abortion" and "stop this murdering of unborn people."

Retired school teacher Joan Acela concluded the panel by calling on the president "to follow the word of God."

"There is an answer in the Bible for every issue," she stated. "And if he just follows that, we will be blessed."