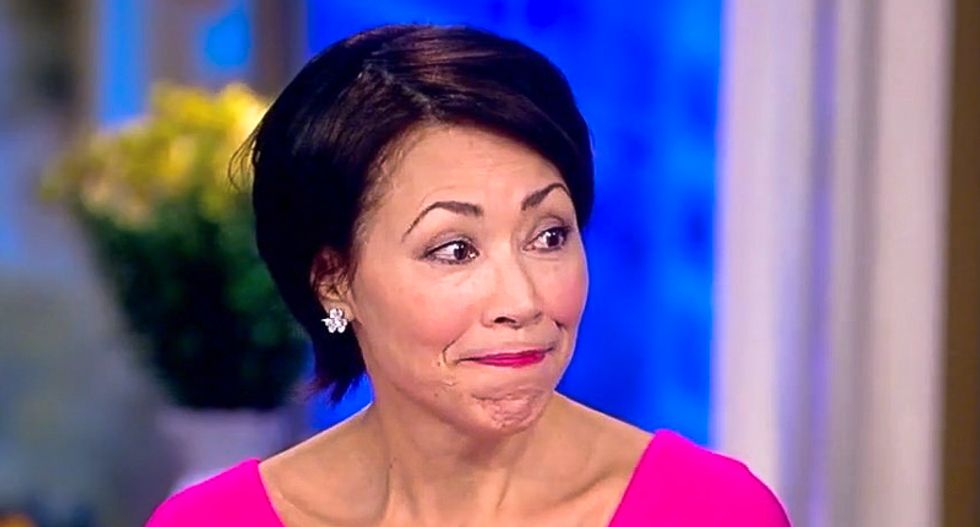 On Tuesday's episode of The View, co-host Whoopi Goldberg reported the news that Kelly had attacked Fonda's anti-war record after Fonda complained about the way the NBC host asked about her cosmetic surgery.

"To drag the Vietnam War into a plastic surgery conversation is a real stretch, Megyn," co-host Joy Behar said. "And also, why are people more angry with Jane Fonda about the Vietnam war that they are with [Presidents] Nixon and LBJ and people who lied about the war and sent boys as cannon fodder to that unjust and filthy war?"

Curry, who worked on the Today Show before NBC hired Kelly, explained that "journalists are not supposed to be the story."

"We're supposed to be humble," Curry said. "We're supposed to use whatever time we're given to shine a light on other stories. I mean, there are so many stories that we're not covering. And to take time with this is not journalism."

"Jane should have just said, 'How much work have you had, bitch?" Behar quipped.

Co-host Sunny Hostin suggested that both the Today Show and Kelly should be above feuding with guests.

"It's Megyn Kelly Today and she is now the highest paid anchor at NBC," she observed.

As Hostin made her remark about Kelly's salary, the camera caught Curry's expression of disgust.

"The decision is really what the viewers will accept or not accept," Curry remarked. "I think that there is a feeling, listening to some of this, not only are we living in a time, but also, we are witnessing from what we saw [from Kelly] a certain amount a meanness, which we should not tolerate."

"We are better than this," she continued. "We are made of good stuff. We can reach out to each other, we can listen."

Behar concluded the segment by apologizing to Kelly.

"I didn't mean to call her a bitch," she admitted. "I like her actually... I just think that she's struggling for a persona."

Donald Trump's influence is melting like a snowball left on the kitchen table.