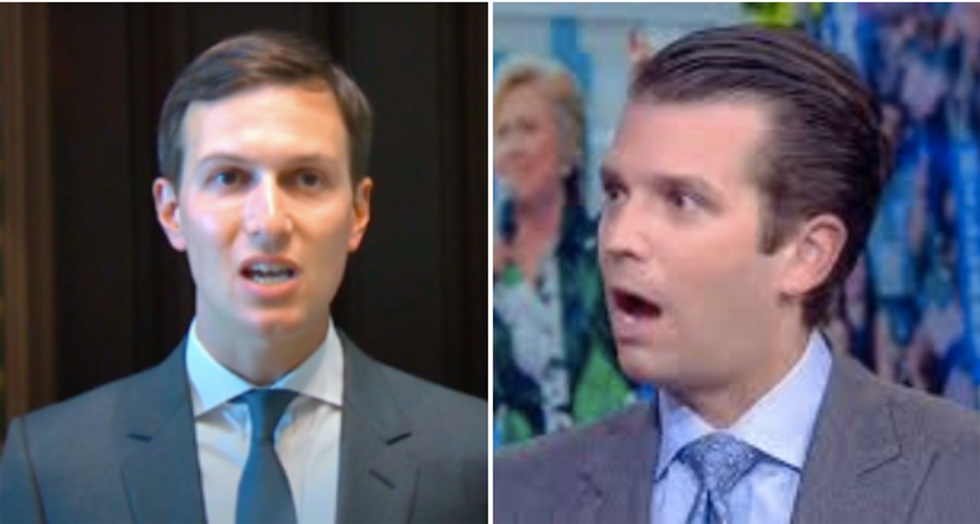 "On page 255 of the book there's the claim it might have been Jared Kushner who actually leaked the details of that Trump Tower meeting where this supposed exchange of dirt on Hillary Clinton was supposed to take place, in order to save himself and sacrifice Don Jr,," Reid noted. "Does that comport with your reporting and make any sense?"

"It makes sense given that it was actually Jared Kushner's fault that the entire Trump Tower meeting was discovered in the first place," Bertrand reminded. "So it makes sense if he wanted to get ahead of it and throw Don Jr. under the bus, which it seems like Steve Bannon has also been eager to do."

"You can't tell me for a second if he's telling some Australian diplomat in a bar what he learned from the Russians that he didn't tell the campaign the same thing," Ackerman concluded.

"So we know a crime was committed, the only question is, 'did the Trump campaign conspire with the Russians in order to throw the election to Donald Trump?' All of the evidence here, all of the indications, indicate the answer is yes," Ackerman explained.

"And who is the person that's communicating with both Guccifer 2.0 and Wikileaks?" Ackerman asked. "Roger Stone, Donald Trump's main political operative."

"So to me if you look at the overall picture and the overall timeline, you clearly have a conspiracy, to basically steal the e-mails from the Democratic National Committee in order to throw the election to Donald Trump," Ackerman explained. "You've got lots of indications that somewhere in this process the Trump campaign joined that conspiracy."

"It's a conspiracy to violate the federal computer hacking law, the Computer Fraud and Abuse Act and that's where I think all of this is going," Ackerman predicted.

Bertrand concluded that "there is no way that Donald Trump Jr. -- who tells his father everything and always has, from my own reporting and others reporting it's been made very clear in business, in life in general, he always went to his dad for everything -- was not telling his father about this very important meeting that he apparently was anticipating for a long time at Trump Tower, where his father was on that very day."

"I think this is something that goes overlooked is that Trump himself was at Trump Tower on June 9th and he was there supposedly around the time that this meeting occurred," Bertrand continued.

"So there was definitely a lot of communication going on, according to my reporting, it's much more extensive than we think," Bertrand hinted.