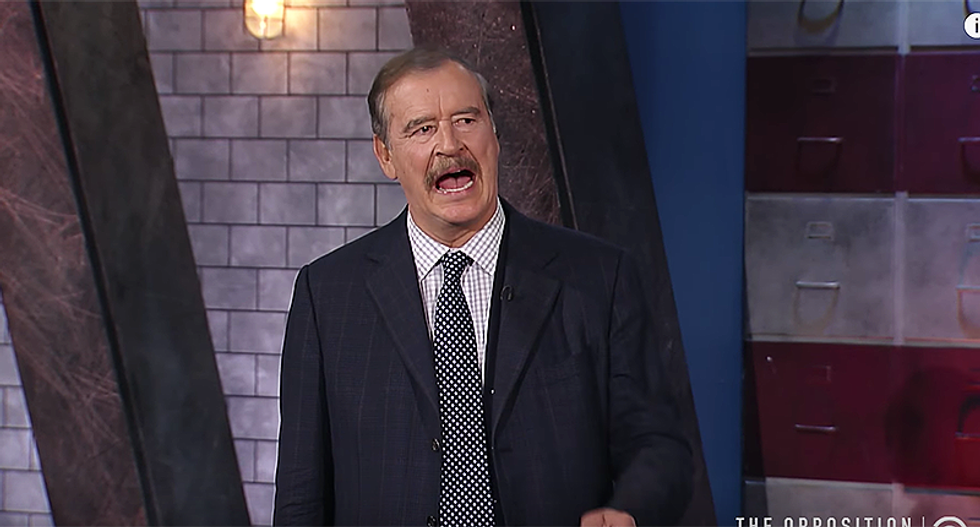 The new late-night show uses the Stephen Colbert-style of comedy, mocking conspiracy theorists like Alex Jones. In his latest installment, Klepper turned his faux conspiracy theories to the border wall.

Fox "thinks that just because he was president of Mexico he has a better idea of what we can expect from the Mexican government," Klepper explained.

The host played the clip of Fox telling the U.S. president his country will "never pay for that f*cking wall." Klepper said that he couldn't believe his ears and asked to play the clip again. Instead, Fox walked out on stage to make his comment himself.

During the interview, Klepper used typical GOP talking points about Mexicans being "rapists, drug dealers, and some, I assume are good people," a slur from Trump as a 2016 presidential candidate.

"Now, I want to know if that's true," Klepper wondered. "Are some good people?"

Fox explained that Mexican people are dedicated and hard-working and deserve respect just as any other person.

Fox turned to talk about Trump's comments about DACA and DREAMers.

"Just look at that shutdown of government," Fox said. "Look at his -- his comments around DACA. I mean, a million kids that have university degrees, that have been living in this nation, that are very powerful force. I wish I [could] take them down to Mexico, the one million of them, but I respect that they want to live in this nation because they have been here for a long, long time. But that shows what kind of a guy we have there -- I'm talking about Trump, yes."

Klepper also welcomed the president with "authentic Mexican cuisine from the taquerias." He brought out "actual bowls from the Trump Grill."

Fox called it a fake and threw it on the floor. Klepper claimed that Fox's act was an allusion to the "Russian hoax" that the 2016 election was "hacked."

Watch the clips from the show below: