WATCH: LAPD cop drags teenager off subway after she refuses to take her feet off a train seat 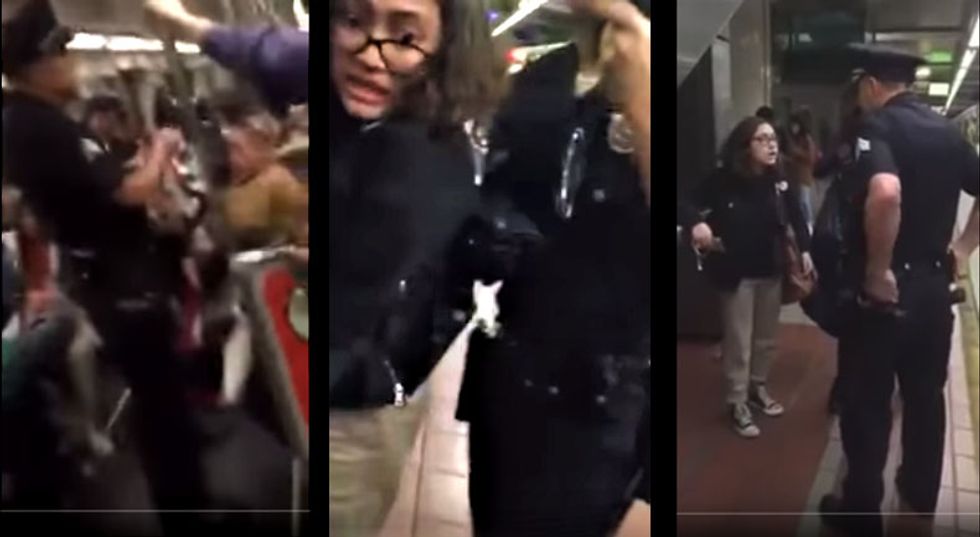 An officer with the Los Angeles Police Department on Tuesday dragged an 18-year-old girl off of a Red Line Metrorail train after she allegedly refused to remove her feet from the seat.

A video of the confrontation posted on YouTube shows a police officer confronting the teenage girl, who later identified herself as West Hollywood resident Bethany Nava, for leaving her feet up on the seat of a Metrorail train after he had previously asked her to take them off.

After the girl refused to comply with the officer's request, he told her that she would have to get off the train -- and at the next stop, he dragged her off the car and pushed her against a wall, where he held her arm behind her back and called for backup.

As the officer waited for backup to arrive, he was confronted by another woman -- 22-year-old Los Angeles resident Selina Lechuga -- who had been on the train and who objected to his handling of Nava. She taunted the officer and accused him of arresting Nava in order to meet his monthly quota for arrests.

When other officers arrived on the scene, both women were taken into custody. According to a police spokesperson, Lechuga has been charged with committing battery against an officer, even though the video does not show her making any physical contact with officers until the officers handcuff her and lead her away.

Nava, meanwhile, was issued a release from custody citation and was cited for being "loud and boisterous" on the train, officers said.