‘Who’s that?’ Trump had no idea who John Boehner was after winning the election: report 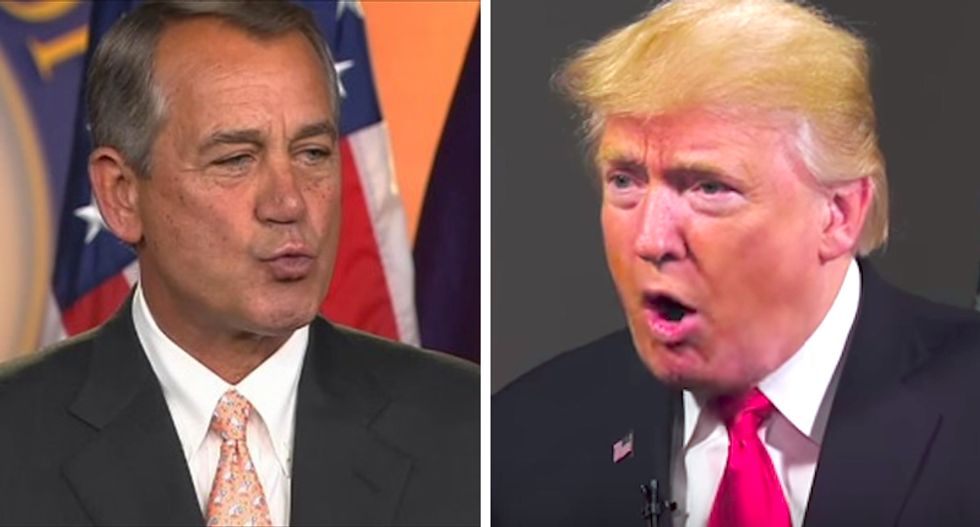 An explosive report from New York Magazine revealed Wednesday that when President Donald Trump was elected he didn't know who former House Speaker John Boehner was.

In a conversation with Roger Ailes, the former Fox News Chief suggested that Trump look at former Rep. John Boehner (R-OH) as his chief of staff. Boehner had stepped down from Congress the year previously.

Trump had no interest in appointing a strong person to be the chief of staff, New York Magazine reported. He first considered son-in-law Jared Kushner. Ann Coulter had to be the one to take Trump aside and explain to him what the rules were.

“Nobody is apparently telling you this,” she said. “But you can’t. You just can’t hire your children.”

Trump did it anyway and the Justice Department developed a ruling on whether nepotism laws applied to Trump.

He also reportedly had a hard time paying attention when Sam Nunberg was sent to explain the Constitution to the candidate. Trump's response made it sound like he was an elementary school civics class. The lack of information prompted Ailes to view Trump as a "f*cking idiot."

Trump ultimately decided on Reince Priebus for his chief of staff, but the former Republican National Party chair was warned what it would be like working for "the Donald."

“Here’s the deal,” a close Trump associate cautioned Priebus. “In an hour meeting with him, you’re going to hear 54 minutes of stories, and they’re going to be the same stories over and over again. So you have to have one point to make, and you pepper it in whenever you can.”

Priebus was quickly undercut with the appointment of senior aide Steve Bannon, who Trump put on the same level.

New York Magazine also painted an alarming portrait of what election night looked like for the Trump family.