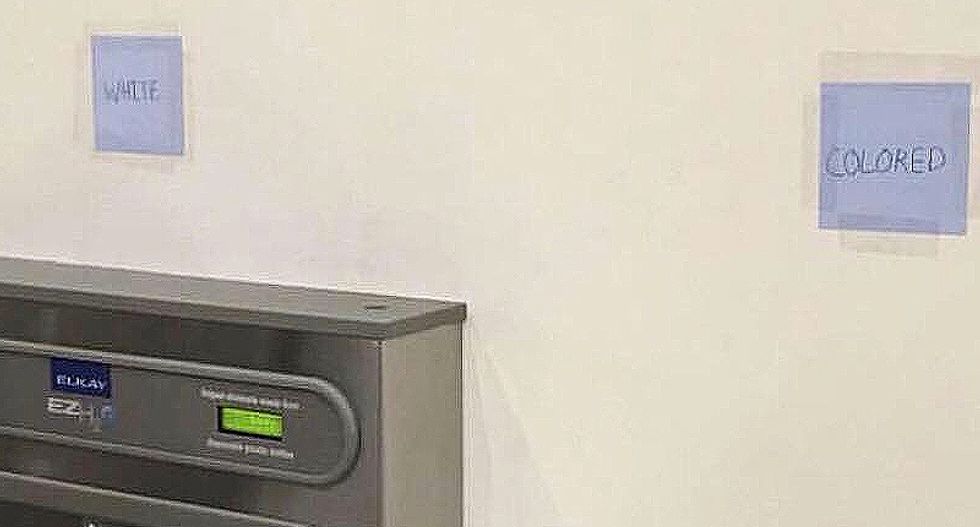 A photo of water fountains at Franklin High School in Wisconsin is going viral this week after a student labeled the fountains "white" and "colored." However, this isn't the first time the school has been involved in racist incidents.

Many senior classes submit gifts to their schools as they exit their tenure, but the legacy of one class disparaged the one that donated filtered water fountains. According to the Milwaukee Journal Sentinel the picture showed the fountain with two signs taped above them, a reference to segregation when whites refused to use the same facilities as blacks because people of color were said to spread disease. The practice was officially outlawed due to the Civil Rights Act of 1964.

However, some students at this Wisconsin school clearly want to see it reinstated.

"I was kind of sad, mad, angry," said Jacob Romanski, who snapped the photo. "It's unacceptable."

"I took this picture today at school," he said on Facebook. "The principal was notified immediately and I made sure this kid got in trouble. I really don’t want to see this again."

Smith's younger sister Bria was out of the country but was alerted to the photo. In an interview with Fox6Now, she said that there have been cases at the school when students of color were racially profiled.

"It's kind of scary to go to a school where people still have the mindset," she said.

Her sister told Fox that she knows the whole school isn't racist, but "individuals [have] taken this stuff lightly" in the past. "It's not funny. It hurts people."

The school did identify the student that did it thanks to Romanski and they claim that they're addressing the behavior, but they haven't clarified if the student will be suspended or expelled.

"Franklin High School values each and every one of our students," Principal Michael Vuolo said in a statement. "This act of intolerance by an individual does not represent the values of Franklin High School or the approximately 1700 people who teach and learn here every day."

Romanski agrees with the assessments from the Smith sisters that this is part of a larger problem at Franklin.

"This picture is kind of opening people's eyes to what the students are seeing," he said. "People say the 'n' word. They throw that around. There's also other discriminatory words they use such as the 'r' word."

It prompted the NAACP, the League of United Latin American Citizens (LULAC) of Wisconsin and the Jewish Community Relations Council of the Milwaukee Jewish Federation to come together demanding the school and district act not just in response to this incident but they want an ongoing effort to stop racism at the schools.

"While we appreciate that administrators issued a statement disavowing this despicable action, the incident demonstrates the need for the school and the district to take immediate and ongoing action to make the school more inclusive and respectful of different cultures," the groups said in a co-authored letter.

According to the groups, the school and the district doesn't even honor the holiday for Rev. Martin Luther King, Jr.

"Today’s action highlights the urgency of taking actions to ensure that the school celebrates tolerance and inclusion as part of its curriculum and culture," the statement continued.

See the full photo below: