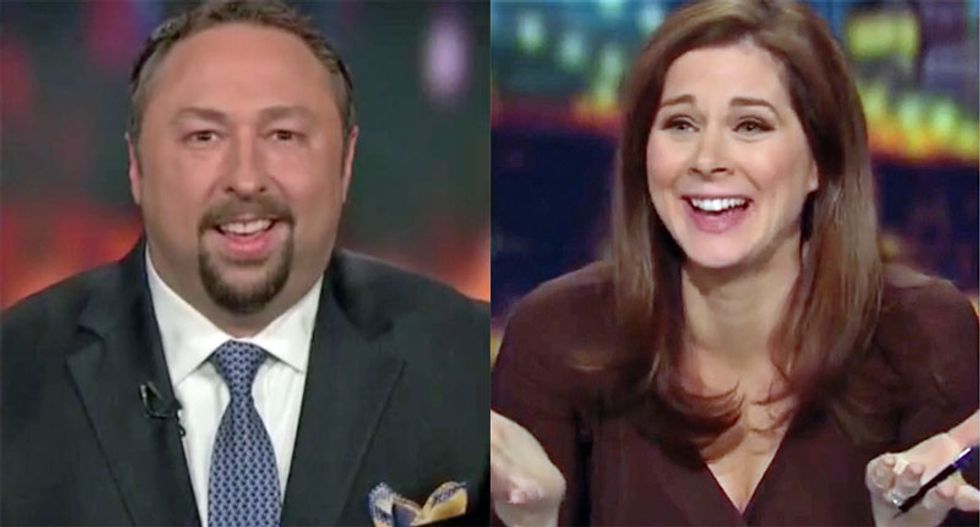 President Donald Trump's former chief campaign spokesman tried valiantly on CNN to praise the commander in chief for the lack of plane crashes, much to the amusement of both his fellow guest and the show's host.

"Let's go to Jason Miller, former senior communications adviser for the Trump campaign," Erin Burnett introduced. "Coming out here, ostensibly to take credit for no airplane crash deaths in 2017, why would he feel the need to even do that, to even take credit for that?"

"Well, Erin, I gotta hand it to the president, of all the issues I thought we would be talking about this evening, at least when I got up this morning, aviation safety wasn't one of them, but the fact we're debating whether or not this is the single safest year that's on record or if it's tied for being the safest year on record, I think really goes to the fact that President Trump knows how to go and push the issues and get us talking about things that he wants us to be talking about," Miller claimed.

"Jason, it's a nice try, but come on," former White House chief ethics lawyer Norman Eisen responded. "It's yet another of the almost 2,000 lies that the president has told in his first year in office."

"It saddens me as somebody who has worked in the White House and who venerates the presidency," Eisen admitted.

"He's like the boy who cried wolf, and Erin, it's going to come back to haunt him because the obstruction of justice charges that Bob Mueller is looking at is going to be up to the president to be candid or not. Is Mueller going to believe him or not when he says "I didn't intend to obstruct'?"

"Like the boy who cries wolf, this is going come to haunt him," Eisen predicted.

"Are you concerned about this, Jason?" Burnett asked.

"No, no, no, no," Burnett interrupted. "The central question is, is the president responsible for it being the safest year on record, Jason."

"I think he's had a huge part of it and I think he absolutely should be able to take credit for it," Miller replied.

"That's so ridiculous, I'm sorry," Burnett apologized, while continuing to laugh at Miller's claim. "You can't give the president credit for a plane not crashing."

Miller proceeded to the complain about fact-checkers fact-checking President Trump.

"Jason, if I ever become a habitual liar and get in trouble, I'll hire you, because you're a good soldier," Eisen joked. "But this is a cancer on the White House and the presidency and the United States."

"When we count on the North Koreans, for example, to take him at his word and his nose has grown like Pinocchio, he's endangering our national security," Eisen concluded.