'You're on national television': Katy Tur smokes Trump loyalist who says FBI is 'our own version of the KGB' 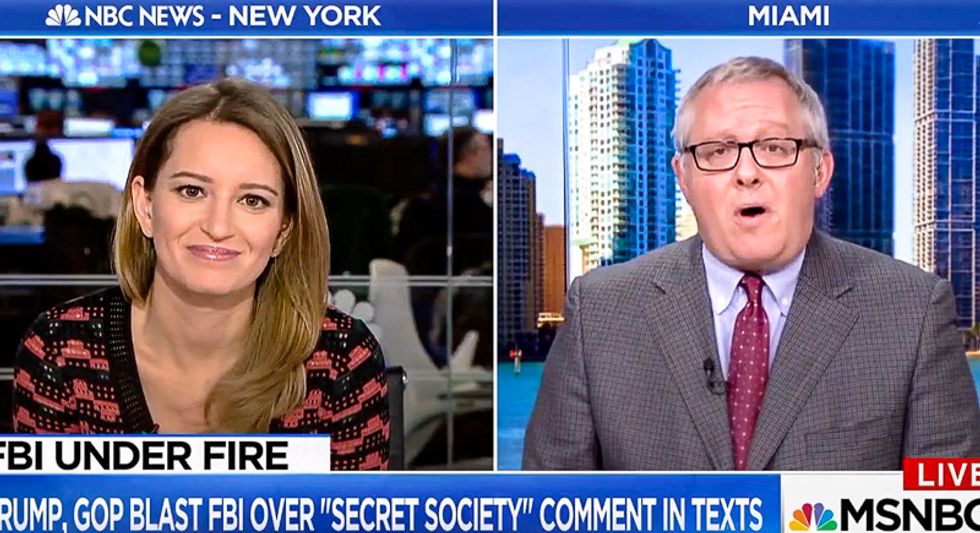 Trump surrogate Michael Caputo on Thursday said that he believes that the United States is becoming Russia and he hinted that members of the FBI are like the Soviet-era KGB service.

During an appearance on MSNBC, Caputo downplayed the news that a so-called FBI "secret society" was ">actually a joke shared between agents exchanging text messages. The "secret society" claim has been used in recent days by conservatives alleging that there is anti-Trump bias in the Justice Department.

"Which comment is a joke, I don't know," Caputo opined to MSNBC host Katy Tur. "When I heard that these text messages were missing, I was very excited because it gave me an opportunity to tell investigators that all my text and all my emails are available except for those that went out between June 16, 2015 and January 20, 2017. Because my dog ate those."

"They found those text messages," Tur Pointed out. "So, that's a bit of a moot issue."

She then asked Caputo if Republicans who are attacking the FBI "are really grasping at straws."

"As a Donald Trump supporter, are you saying that anybody who doesn't support the president... that they can't be fair?" she wondered.

Caputo agreed that "people have a right to their own opinions."

"I'm very concerned about this," Caputo continued. "Because I'll tell you, it turns out it might have been redundant if Donald Trump had ever tried to collude with Russia. We're turning into Russia ourselves! Complete with our own version of the KGB!"

"Who are you calling the KGB, Michael?" Tur asked, sounding slightly annoyed.

"I'm telling you, the people involved in this investigation and the things that I'm hearing that may in fact be in this [Republican anti-FBI] memo deserve to be exposed," Caputo remarked.

"So you're saying people in the FBI are actually part of the KGB?" Tur pressed.

"Not part of the KGB," Caputo shot back. "I was being facetious as you know. Funny how the jokes in these text messages were hilarious to you guys."

"But you're on national television!" Tur interrupted. "And you're saying people in the FBI are acting like the KGB."