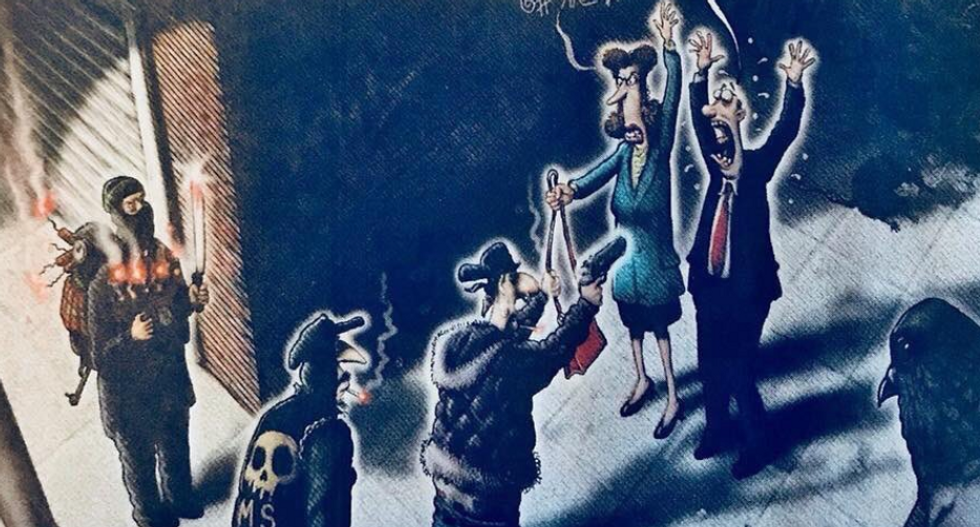 The Albuquerque Journal on Thursday apologized for an “insanely racist” editorial cartoon that ran in the conservative newspaper’s opinion section.

The cartoon shows a man and woman held up at gun point by MS-13 gang members. “Now, honey, I believe they prefer to be called ‘Dreamers’… or future Democrats…” the man says.

Wow. This insanely racist cartoon ran today in the @ABQJournal, my hometown newspaper and the first place I ever wo… https://t.co/8ErUmd2fNp
— Kate Linthicum (@Kate Linthicum) 1518063207.0

The Journal weathered intense backlash after publishing the graphic, including from Sen. Tom Udall, who demanded the paper apologize. State Sen. Linda Lopez (D) called the cartoon “another glaring example of the ignorance, racism and hatred openly permeating throughout our country.”

Words and images are still hateful and offensive, even when they appear in a cartoon. The @ABQJournal should apologize.
— Tom Udall (@Tom Udall) 1518056908.0

In an editorial addressing the outrage, staff writers argued the Journal “has supported a path to citizenship for the country’s estimated 1.8 million Dreamers,” who are the subject of a fierce, ongoing debate in Congress.

Editor Karen Moss issued a statement arguing the paper “[offers] views from all sides of the spectrum, and we realize some of the content will offend readers.”

“We do not agree with many of those views, but their purpose is to spark discussion and debate. In hindsight, instead of generating debate, this cartoon only inflamed emotions,” Moss added. “This was not the intent, nor does the Journal condone racism or bigotry in any form.”

Editorial Page Editor D’Val Westphal said she chose the cartoon because, from her perspective, the “conservative Anglo couple” were “ reacting out of fear and labeling their attackers as ‘Dreamers’ and even Democrats” despite the MS-13 gang members being “clearly labeled” as such.

“We live in a very politicized and reactionary time,” Westphal added. “But the mission of an editorial page is to explore all sides of an issue, to make people think and debate and examine closely the opposing view of an argument.

“Unfortunately, this cartoon did not inspire that kind of discussion,” Westphal acknowledged.