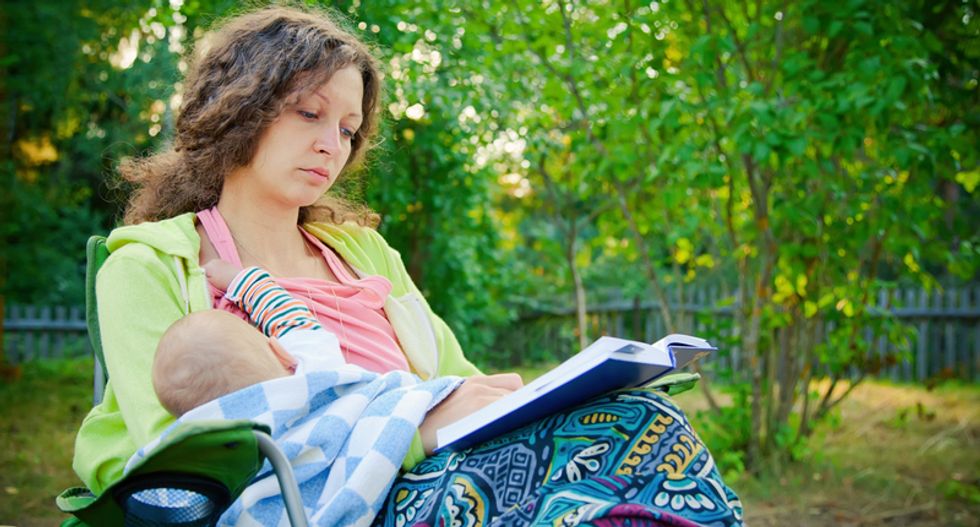 A 30-year-old transgender woman successfully breastfedher baby for six weeks, until her milk production had to be supplemented with formula. How is that possible?

First, let's look at her case: she took hormonal treatment for six years before her baby was born. She hadn't undergone any gender-affirming surgery, such as orchidectomy (the surgical removal of testicles) or vaginoplasty (the construction or reconstruction of the vagina). Basically, the testicles were still there and functioning.

To suppress the testosterone production, alongside the feminizing hormone regimen, she took spironolactone, a drug generally used for treating fluid build-up in heart conditions, but which also lowers the production of testosterone and promotes gynecomastia (breast growth in men or transgender women).

The transgender woman wanted to breastfeed after her partner decided, during her pregnancy, that she was not interested in breastfeeding, even though the American Academy of Pediatrics recommends that babies are exclusively breastfed during their first six months of life.

Easier said than done. Inducing lactation in non-pregnant cisgender women is a fairly common procedure, however, so the challenge was to the liking of New York transgender-medicine doctors Tamar Reisman and Zil Goldstein, the authors of the study published in the journal Transgender Health.

First, the researchers had to convince the patient's body that she was pregnant, so they enhanced the dosage of estrogen and progesterone, the two feminine hormones implicated in pregnancy. Later, the doctors reduced those hormones to mimic childbirth. Additional to this treatment, they gave her a galactagogue - domperidone - to increase the secretion of prolactin, the hormone responsible for milk production. Domperidone is generally used to treat nausea, but this drug is banned in the US because in some intravenous instances it produced cardiac arrhythmias, cardiac arrest, and sudden death. The woman procured domperidone from Canada.

To increase milk production, doctors also recommended using a breast pump that enhanced levels of oxytocin and prolactin. After one month of treatment, she started producing milk droplets, and after three months of treatment, 2 weeks before the baby's due date, the patient was making 8 oz. of breast milk per day.

"The patient breastfed exclusively for 6 weeks. During that time the child's pediatrician reported that the child's growth, feeding, and bowel habits were developmentally appropriate. At 6 weeks, the patient began supplementing breastfeedings with 4–8 oz of Similac brand formula daily due to concerns about insufficient milk volume" write the authors.

"At the time of this article submission, the baby is approaching 6 months old. The patient continues to breastfeed as a supplement to formula feeding, and she continues to adhere to the medication regimen described earlier."

The wonders of breastfeeding are irreplaceable. The study enumerating many advantages to breastfeeding. But I'm just left with one question: Knowing all these things about breastfeeding, why didn't the birth-mother breastfeed the baby herself? It boggles the mind.

Another question arises: Did the induced milk have the same nutritional and immunologic properties as the milk that would have come from a pregnant woman?

Colostrum, known as the first milk, is different from the usual breast milk. Colostrum is produced only at the last stage of pregnancy and during the first days postpartum, and its qualities are different from breast milk. Human first milk is rich in immunologic components such as secretory IgA, leukocytes, lactoferrin, and developmental factors such as epidermal growth factor. It contains low concentrations of lactose, indicating its primary functions to be immunologic and trophic rather than nutritional.

Madeline Deutsch, director of clinical services at the UCSF Center of Excellence for Transgender Health, believes there has not been adequate research on the matter. Deutsch, also a transgender woman with a 6-month-old child, said she understands transgender mothers, but trying to induce lactation is "not something I would do".

Doctor Deutsch is reluctant on this matter because there is no available information as to whether the medication used was transferred to the baby. She is also concerned about the nutritional values of the breast milk produced by transgender women.