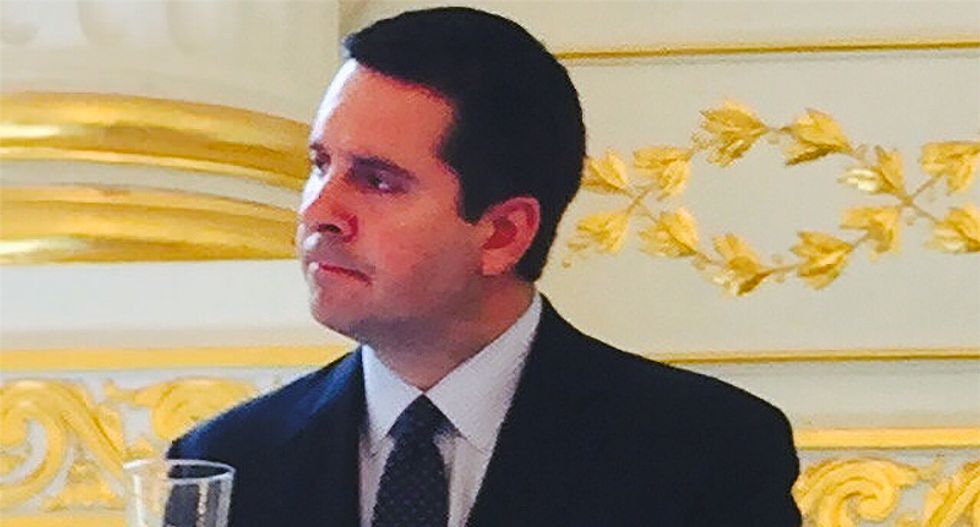 The Democratic minority on the U.S. House of Representatives Intelligence Committee on Saturday released a response to Republican charges that the FBI and Justice Department have abused the law in their investigation of possible ties between Russia and Donald Trump's 2016 presidential campaign.

The Democrats' 10-page memo, released on Saturday in partially-redacted form, calls an earlier Republican version "a transparent effort to undermine" the FBI, the Justice Department, Special Counsel Robert Mueller, and congressional probes into possible collusion between Russia and the Trump campaign.

The Republican memo, the Democrats allege, "also risks public exposure of sensitive sources and methods for no legitimate purpose."

The Democratic memo and a Republican counterattack that included a point-by-point refutation of the minority Democrats' conclusions, are an escalation of the partisan feuding that Rep. Adam Schiff, the ranking Democrat on the Intelligence Committee, and other members of his party have said is sabotaging the House committee's investigation.

In a message posted on Twitter, Trump responded, "The Democrat memo response on government surveillance abuses is a total political and legal BUST. Just confirms all of the terrible things that were done. SO ILLEGAL!"

In a statement, the committee's Republican Chairman, Rep. Devin Nunes, renewed his allegations, saying: "The American people now clearly understand that the FBI used political dirt paid for by the Democratic Party to spy on an American citizen from the Republican Party."

"We wanted it out because we think it is clear evidence that the Democrats are not only trying to cover this up, but they're also colluding with parts of the government to help cover this up," Nunes said during an appearance at the Conservative Political Action Conference in Oxon Hills, Maryland.

In a statement released on Saturday, White House Press Secretary Sarah Sanders said: "While the Democrats' memorandum attempts to undercut the president politically, the president supported its release in the interest of transparency."

The Democratic memo charges that Republicans deliberately omitted facts from their document that undermine their allegation that the FBI conducted improper surveillance of one-time Trump campaign aide Carter Page, "whom the FBI assessed to be an agent of the Russian government."

The Justice Department's request for a surveillance warrant "was based on compelling evidence and probable cause to believe Page was knowingly assisting clandestine Russian intelligence activities in the U.S.," the memo says.

"The FBI had ample reason to believe that Carter Page was acting as an agent of a foreign power based on his history, including the fact that he had previously been a target of Russian recruitment, his travel to Russia and other information," Schiff said in a statement.

The Democratic memo, which was released by the White House at mid-afternoon on Saturday as Republican committee chairman Nunes was addressing the Conservative Political Action Committee, had been reviewed by the FBI and the Justice Department before its release, Schiff said.

"But it is unfortunate that the weekend release of the Democratic memo by the White House was delayed beyond what was necessary and to the advantage of those seeking to mislead the American public," he added.

The Democratic memo also disputes a Republican charge that the FBI initiated a counterintelligence investigation in late July 2016 based on an unverified dossier compiled by former British intelligence officer Christopher Steele and paid for by the Democratic National Committee through a law firm.

By then, the memo reveals, "the FBI had already opened sub-inquiries into a (redacted number of) individuals linked to the Trump campaign." All the names except Page's were blacked out, but a footnote names Gates, former Trump National Security Adviser Michael Flynn, campaign aide George Papadopoulos, and one-time Trump campaign manager Paul Manafort.

All but Page and Manafort now have pleaded guilty to federal charges and are believed to be cooperating with Mueller.

The FBI received Steele's reporting in mid-September, more than seven weeks after launching its investigation of Page's ties to Russia.

The requests "made only narrow use of Steele's reporting, "chiefly his suspected July 2016 meetings in Moscow with Russian officials."

The Democrats also said the Justice Department's Oct. 21, 2016, application to the Foreign Intelligence Surveillance Court for warrants to monitor Page and three subsequent renewals offered "a multipronged rationale for surveiling Page," who by then had left Trump's campaign.

The memo raises but does not answer questions about whether Page or other Trump affiliates might have helped Russia craft a politically sophisticated cyber campaign to help Trump win the presidency by targeting specific groups, prejudices, and areas.

Mueller last week described those efforts in a detailed indictment of 13 Russians and three Russian companies for meddling in the 2016 election.

Russia denies charges that it interfered in the election.