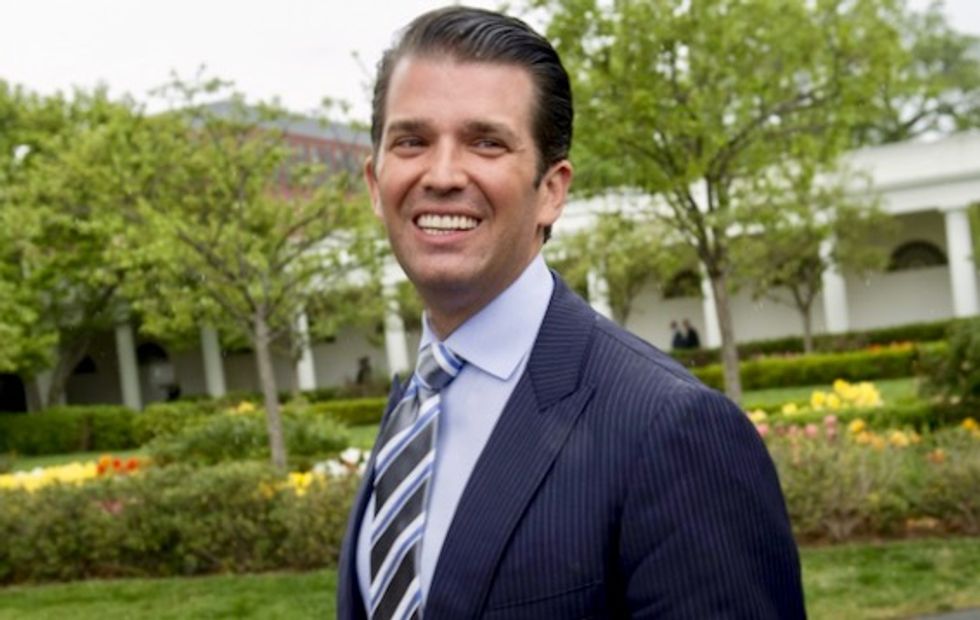 Dozens of property investors and their families will be treated to dinner with Donald Trump junior in Delhi this week after snapping up flats in a Trump Towers luxury development on the outskirts of the Indian capital.

Trump's local partners have promised dinner with the US president's son to anyone who buys into the development of high-rise apartments boasting floor-to-ceiling windows, state of the art amenities and a "lifestyle concierge".

At 2.5 million rupees (around $39,000) just for the downpayment on the smallest and cheapest flat, that is well beyond most Indians.

Nonetheless around 75 people have already stumped up and Indian developer Tribeca expects that number to increase to 100 before the promotion deadline expires on Thursday, a staff member told AFP on condition of anonymity.

"The meeting is a token of gratitude to the clients for showing tremendous faith in the upcoming project," said the Tribeca employee.

Adverts in Indian newspapers on Monday promised prospective buyers their neighbours would include a "renowned industrialist", "art maestro" and "famous Indian cricketer" -- although it was not clear whether this was based on the identity of the existing buyers.

"Trump is here. Are you invited? read the full-page advert in Monday's Times of India.

The development is in the modern satellite city of Gurgaon, where many major companies now have their headquarters.

All are being built with local partners, with the Trump Organization giving permission to use its brand and taking a share of the profits.

According to media reports, the estimated cost of developing these projects is $1.5 billion.

The Trump family earned $3 million in royalties in 2016 from ventures in India, according to a New York Times report.

Trump junior and his brother now head the company after their father stood down when he became president amid concerns over a conflict of interest.

Although the US embassy says he is in Delhi on an unofficial visit, Trump junior is due to speak on Indo-Pacific relations at a business conference on Friday at which Prime Minister Narendra Modi will be the keynote speaker.

The luxury property in Gurgaon is being developed by Indian firms Tribeca and M3M, with construction expected to start towards the end of the year.

India's residential property market has struggled in recent years, hit by a glut in urban centres combined with the impact of a 2016 move to tackle tax evasion with a ban on high-value banknotes.