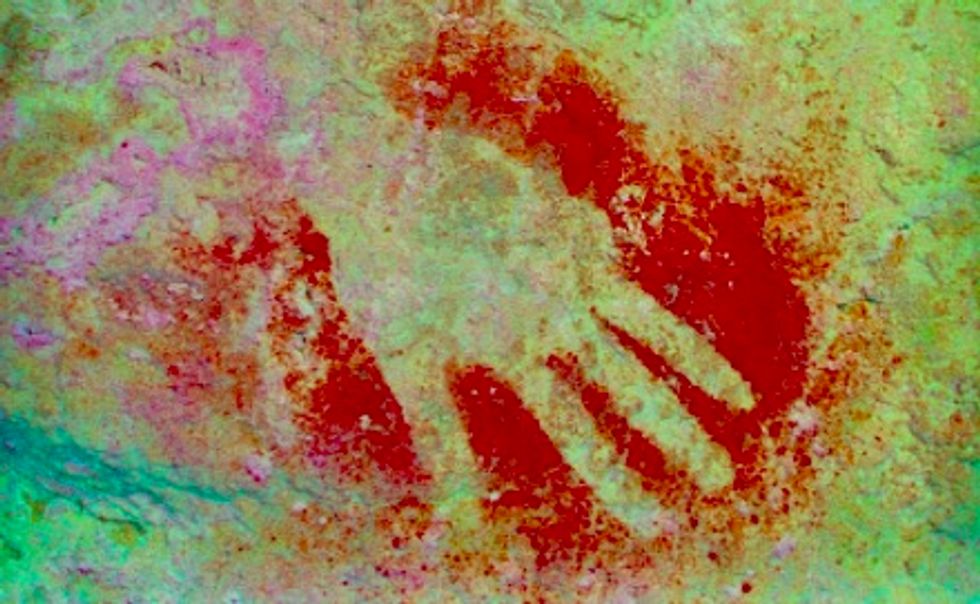 The world's oldest known cave art was crafted by Neanderthals more than 20,000 years before modern humans arrived in Europe, showing that our extinct cousins were capable of symbolic thinking just like us, international researchers said Thursday.

The report in the journal Science is based on new technology that reveals the most accurate age yet of ancient cave paintings at three different archeological sites in Spain.

"This is an incredibly exciting discovery which suggests Neanderthals were much more sophisticated than is popularly believed," said co-lead author Chris Standish, an archaeologist at the University of Southampton.

"Our results show that the paintings we dated are, by far, the oldest known cave art in the world."

Since they were created some 64,000 years ago -- at least 20,000 years before modern humans arrived in Europe from Africa -- "they must have been painted by Neanderthals," he added.

Using mainly red pigments and sometimes black, groups of animals, hand stencils, engravings, dots, discs and geometric designs are depicted in the cave paintings at La Pasiega in the northeast, Maltravieso in the west and Ardales in the south of Spain.

These symbolic renderings point to an intelligence that was previously thought to be uniquely the realm of modern humans.

"The emergence of symbolic material culture represents a fundamental threshold in the evolution of humankind," said co-lead author Dirk Hoffmann of the Max Planck Institute for Evolutionary Anthropology.

"It is one of the main pillars of what makes us human."

Plenty of evidence already exists to debunk the myth that Neanderthals were knuckle-dragging brutes, and instead were capable of decorative impulses and rituals, like burying their dead.

But cave paintings were one of the last bastions that appeared to differentiate anatomically modern humans from Neanderthals, who died out some 35,000 years ago.

"Recent years have seen studies that show Neanderthals made extensive use of ornamental objects, potentially built structures, and on the whole, appear far more capable of symbolic cognitive processes than has historically been regarded," Adam Van Arsdale, associate professor of anthropology at Wellesley College, told AFP.

"These results suggest that cave painting, also, fails to distinguish Neanderthals and modern humans," said Van Arsdale, who was not involved in the study.

He said the findings reflect "some impressive technical developments in dating techniques in cave contexts, issues that have always posed a challenge for our understanding the timing of key events in human evolution."

He added: "As a new and technically challenging method, it will be good to see these results replicated by others."

- To date but not destroy -

Until now, figuring out the age of cave drawings without destroying them has been difficult.

The new approach is based on obtaining a minimum age for cave art "using Uranium-Thorium (U-Th) dating of carbonate crusts overlying the pigments," explained Hoffman.

The technique of U-Th dating is based on the radioactive decay of uranium isotopes into thorium.

It can determine the age of calcium carbonate formations going back as far as 500,000 years, much further than the widely used radiocarbon method, said the report.

More than 60 tiny samples, less than 10 milligrams each, were analyzed from the three caves.

A second study, also published this week by Hoffmann and colleagues, determined the age of an archaeological deposit located at the Cueva de los Aviones, a sea cave in southeast Spain.

U-Th dating found the flowstone covering the deposit to about 115,000 years, older than similar finds in south and north Africa associated with Homo sapiens.

The dating shows they came from a time when Neanderthals lived in western Europe.

"According to our new data Neanderthals and modern humans shared symbolic thinking and must have been cognitively indistinguishable," said Joao Zilhao, a researcher from the Catalan Institution for Research and Advanced Studies in Barcelona who was involved in both studies.

"We have examples in three caves 700 kilometers apart, and evidence that it was a long-lived tradition. It is quite possible that similar cave art in other caves in Western Europe is of Neanderthal origin as well," he said.

"Neanderthals created meaningful symbols in meaningful places. The art is not a one-off accident."