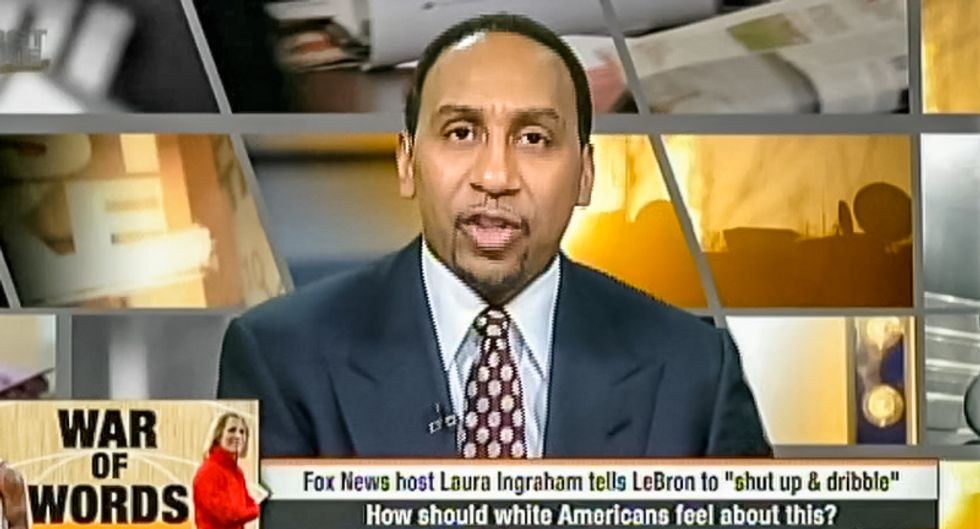 Conservative ESPN host Stephen A. Smith, who has repeatedly told African-Americans to vote Republican, on Monday called out Fox News host Laura Ingraham after she said that LeBron James should "shut up and dribble" instead of talking about President Donald Trump.

After James asserted that Trump does not "give a [expletive] about the people," Ingraham blasted him on her Fox News program.

"This is what happens when you attempt to leave high school early to join the NBA," Ingraham told her viewers. "It's always unwise to seek political advice from someone who gets paid $100 million a year to bounce a ball."

For his part, James is on record saying that he will not be silenced by the Fox News host.

Speaking on ESPN's First Take program on Monday, Smith explained why he felt compelled to speak out against Ingraham on behalf of other American-Americans.

"People from different ethnic backgrounds may take it differently," Smith said to conservative ESPN host Will Cain. "She has an obligation to be sensitive to that because if they hear it differently than you or I heard it, she holds some culpability in that regard."

"More important," Smith told Cain. "When you talk about how you don't speak for all white people and you don't like it when I say 'as a black man', I've said this to many white folks before and I'll say it to you right now and I don't mean it in an insulting fashion, I'm just giving you an education about something here."

The ESPN host continued: "It is my belief and those emanating from a plethora in the African-American community that white folks come to work every day with a job to do. We come with a responsibility. I am on the airwaves. You have the license, Will Cain, to sit up there and say, 'I'm going to tell you how I feel, I don't speak for us, I don't speak for white folks.' But I'm am telling you right now... it's a sports-related item in this instance, it could be anything else and the black community is like, 'Make sure you say this, make sure you say that, you've got to address this.'"

According to Smith, "people are looking at black folks [on TV to speak out] because the paucity of African-Americans in position to have a voice."

"If you take into account history, the kind of things we have been subjected to, the kind of challenges that we inherently are forced to have to overcome every single day of our lives," he added, "there is this belief emanating from our community that you have to recognize those challenges, be sensitive to it and keep that thought process in your mind. You have to be cognizant to that."

"That is not something a white individual has to be concerned about," Smith said. "Will Cain can come on national TV and speak for Will Cain. And the white community is not going to hold you accountable for what you do or don't feel. But as a black person, if you don't sit up there and at least echo -- not saying you're obligated to agree -- but if you don't at least echo that sentiment then the belief is you don't relate to history and what history has taught us."

Following a commercial break, Smith continued to try to explain to his fellow panelist, who were white, why standards are different for African-Americans.

"White folks make up 66 percent of the population," he remarked. "There's a level of comfort in these United States of America that you have enjoyed that most black Americans will tell you we have never nor will we ever enjoy. We have to live with what we have to live with."

"It's the reason why LeBron James, who's worth close to a billion dollars, that has a house in Brentwood, gets the N-word spray-painted on his gate on his house in Brentwood," Smith said. "There's a reason for that. It's constantly reminding us that no matter how far we climb, there's always something or someone or a plethora of people or particular group in the populous who believes or who's quick to remind us we are what we just are."