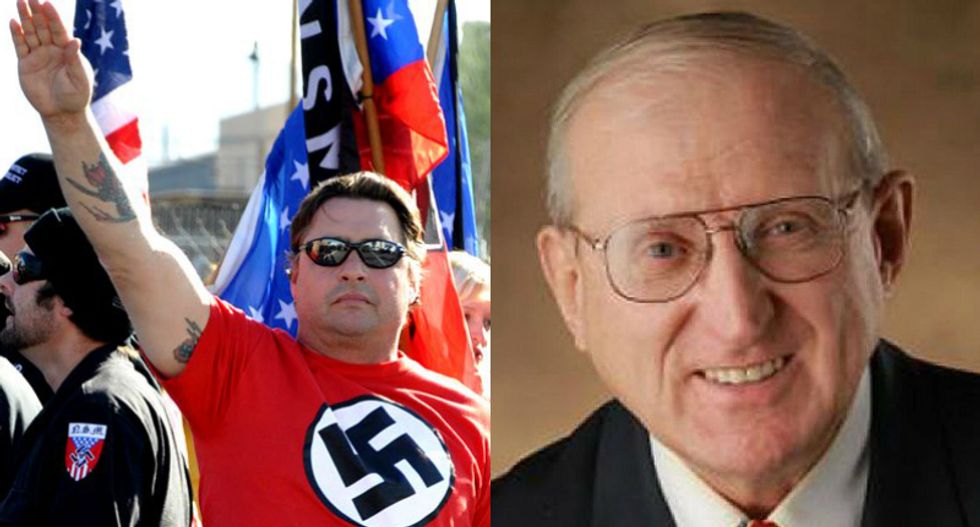 A known Holocaust denier and former Nazi leader is the only Republican running for the GOP nomination for Illinois' 3rd Congressional District.

The Chicago Sun-Times described candidate and retired insurance agent Arthur Jones as "an outspoken Holocaust denier, activist anti-Semite and white supremacist." He admitted to the newspaper that he was a former leader of the American Nazi Party and that his current group, America First Committee, bars Jewish people from joining.

Jones' campaign website, ArtJonesForCongressman.com, includes a section titled "Holocaust?" that features photocopied pages for typewritten fliers that describe "the Holocaust racket" as "the biggest, blackest, lie [sic] in history." He suggests that "a few professional concentration camp survivors" promote the conspiracy, an idea which appears to predate the modern concept of "crisis actors" paid to enact "false flag" attacks that trick the public into believing atrocities have happened.

When asked by the Sun-Times about his views, the candidate explained that he's "running for Congress not the chancellor of Germany."

"To me the Holocaust is what I said it is," Jones said. "It’s an international extortion racket."

This is the eighth time the 70-year-old candidate has run for the Republican primary in Illinois' 3rd Congressional District, all of which he lost.

The Illinois Republican Party rebuked the candidate in a statement, saying their chapter "and our country have no place for Nazis like Arthur Jones,"

"We strongly oppose his racist views and his candidacy for any public office, including the 3rd Congressional District," Tim Schneider, a spokesman for the party, told the newspaper.