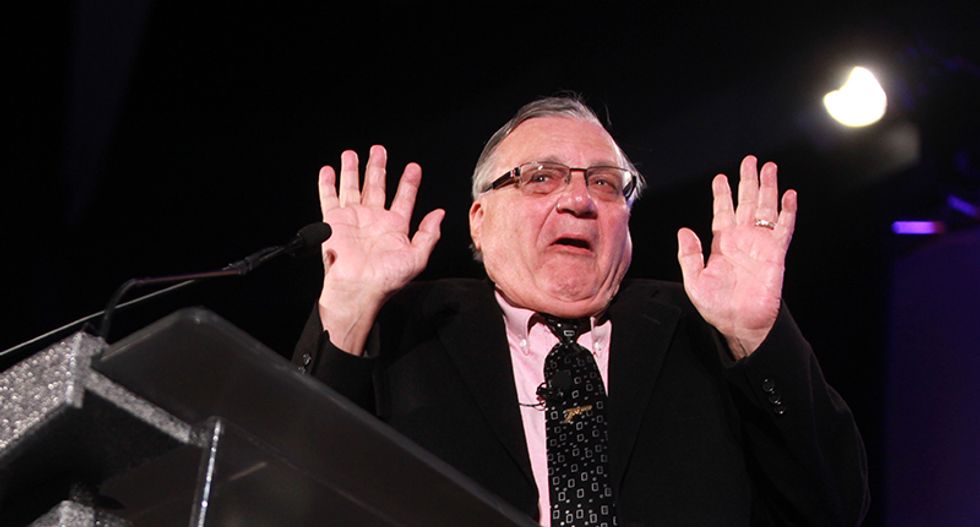 Former sheriff (and convict) Joe Arpaio on Thursday responded to reports that a website he gave five interviews to is known for its anti-Semitism by claiming he didn't know they were bigoted.

"It was brought to my attention I gave interview [sic] to publication that supports antisemitism," the ex-sheriff who was pardoned by President Donald Trump tweeted. "I was unaware and don't support that view point."

It was brought to my attention I gave interview to publication that supports antisemitism; I was unaware and don't support that view point
— Sheriff Joe Arpaio (@Sheriff Joe Arpaio) 1517510927.0

As The Arizona Republic reported Wednesday, Arpaio has given at least five interviews to the "American Free Press" since 2014, the most recent of which was published on January 21. In the time since he became a featured interviewee, AFP ran a number of articles promoting anti-Semitic conspiracy theories, including one on the "Jews who control Hollywood" and another lamenting the Amazon takedown of a book "touching on the role of the Rothschild [sic] in fomenting unrest in Europe before WWII."

When asked about the site, which traffics in Holocaust denial and was founded by a neo-Nazi, the former Maricopa County Sheriff declined to condemn the publication and praised their coverage of him.

"I'm not going to criticize the news media like you," Arpaio told the Republic. "I can't believe another news outlet is criticizing a newspaper."

"[AFP editor Mark Anderson has] written some good stories, especially on my situation," he continued. "I think he wrote one a little while back that was very honest. I can't say that for other publications."

After Arpaio tweeted his non-apology, Twitter users noted that he too has flirted with anti-Semitism.

"Joe Arpaio used to joke about how Maricopa County's Tent City was his own 'concentration camp,'" the Independent Journal-Review's Josh Billinson posted.