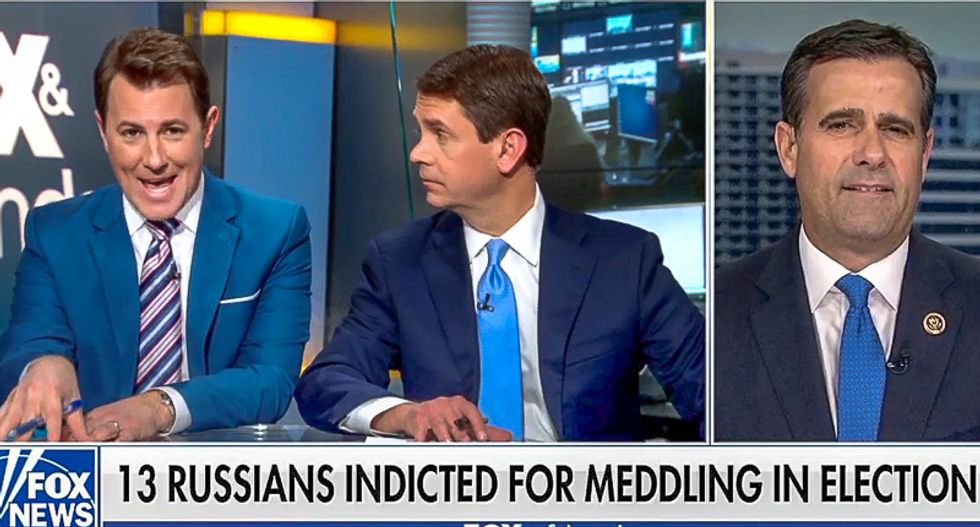 A Republican lawmaker on Sunday refused to take the bait on Fox News when he was asked if Hillary Clinton could be put in jail over indictments of Russians that we revealed last week by Special Counsel Robert Mueller.

The host of Fox & Friends asserted in a Sunday morning segment that the indictment of 13 Russians for interfering in the U.S. election could be a path to charging Clinton because her campaign paid for opposition research on then-candidate Donald Trump that was allegedly used by the FBI as evidence of Russian meddling.

"The question now, what does this mean for the Clinton campaign?" Fox & Friends co-host Todd Piro asked Rep. John Ratcliffe (R-TX). "And can they be charged for their alleged ties to that anti-Trump dossier?"

"There is nothing inherently illegal about doing opposition research or even using foreign sources to do that," Ratcliffe replied before insisting that "the greater abuses relate to how that dossier was used before the FISA court."

While the Texas Republican agreed that some of the information in the indictments was "good news for the president," he also argued that Trump was not in the clear legally.

"I do think that the negative here is that Bob Mueller has clearly indicated in the indictment that the investigation will continue," Ratcliffe said. "When a prosecutor uses the term that there are others 'known and unknown' to the grand jury that are part of the conspiracy, that's a signal that there are other either superseding indictments to come or additional indictments about additional conspiracies."