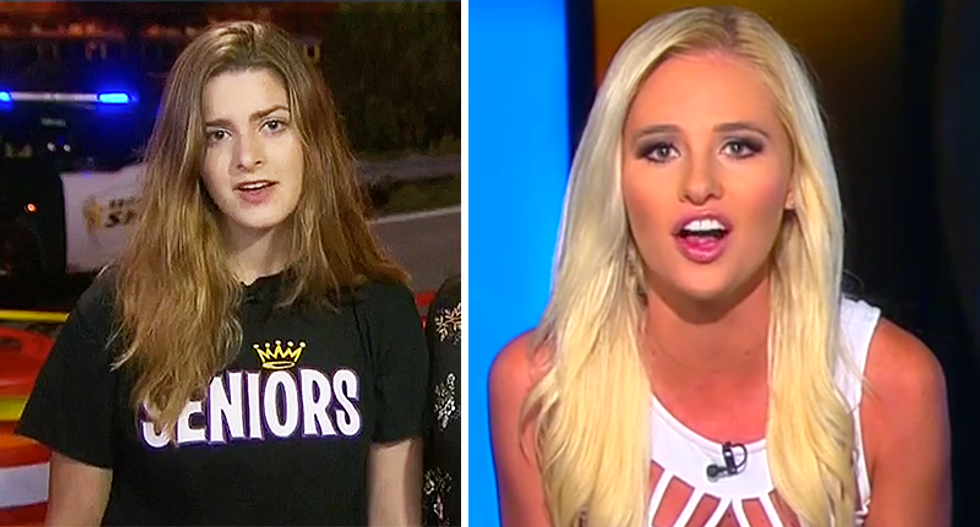 Carly Novell told CNN's Don Lemon that she doesn't know how to feel because the school shooting she experienced in Parkland, Florida wasn't "normal" and "it shouldn't be normal."

Novell is one of the students who snapped back at right-wing commentators who tried to say the shooting wasn't about guns.

“A gun has killed 17 of my fellow classmates,” Novell wrote to Tomi Lahren. “A gun has traumatized my friends. My entire school, traumatized from this tragedy. This could have been prevented. Please stfu tomi.”

She told Lemon that Lahren seems to be a person who frequently tries to get a rise out of people and acknowledged that clearly it worked in her case.

"The worst comes out and you see who the real opportunists are," Lemon told Novell. "Obviously it was to promote her career or social media or whatever. She decided to say something controversial without thinking something stupid."

Novell confessed that while they were hiding in a closet from the gunman they were all talking about gun control and the need for gun safety.

Merri Novell, Carly's mother, is the daughter of a man who hid from America's first mass shooting 70 years ago. She noted that nothing has changed.

"I think most importantly we have to look at the bigger picture," she said. "This keeps happening over and over again. It started all the way back in 1949. Nothing has really changed because the gun laws haven't changed. And these people might be mentally ill, but they still have a gun in their hand and that's what's killing the people."

Merri confessed that as a child she would practice hiding, fearful of what might happen to her. She noted she was in the Ft. Lauderdale airport when another shooting broke out and she began searching for places to hide. With that shooting and the Parkland shooting, it means every generation Merri Novell's family has experienced a mass shooting.

Carly confessed "this will be a life changing experience." She said she went to school on Valentine's Day "and then it was the worst day ever. There's no other way to put it. And now, my whole life is different. This whole town is different."