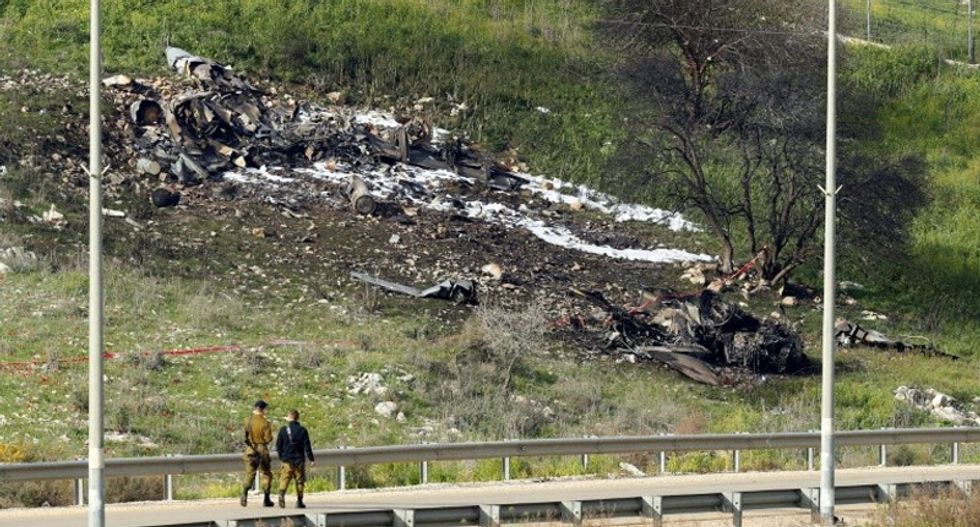 An Israeli fighter jet crashes in northern Israel on February 10, 2018 after coming fire from Syrian air defences in one of the biggest confrontations between Israel and arch foe Iran in years. (AFP / Jack GUEZ)

Israel attacked what it said were Iranian positions inside Syria on Saturday in "large-scale" raids after one of its warplanes was targeted by Syrian air defences and crashed.

Following the most serious confrontation between arch foes Israel and Iran since Syria's civil war began in 2011, Prime Minister Benjamin Netanyahu vowed to prevent Tehran from establishing a threatening military presence in the Arab state.

Israel's raids came after it intercepted what it said was an Iranian drone entering its airspace from Syria, calling it an "attack".

Washington backed Israel and blamed Iran for the escalation.

It was the first time Israel has publicly acknowledged targeting what it identified as Iranian positions in Syria since the conflict started.

Iran denounced Israeli "lies" and said Syria had the right to self-defence in response to the strikes.

Russia's foreign ministry urged "restraint" by all parties, adding it was "unacceptable to create threats to the lives and security of Russian soldiers" in Syria.

Israeli military spokesman Jonathan Conricus warned that Syria and Iran were "playing with fire", but stressed that his country was not seeking an escalation.

"This is the most blatant and severe Iranian violation of Israeli sovereignty" in recent years, Conricus told journalists.

"Twelve targets, including three aerial defence batteries and four Iranian targets that are part of Iran's military establishment in Syria were attacked," a military statement said.

The two crew from the crashed F16 were alive after ejecting, although one was severely wounded, the military said.

They landed inside Israel and were taken to hospital.

Israel said the confrontation began with the drone entering its airspace before being intercepted by a helicopter.

Conricus said it was intercepted well inside Israel north of the city of Beit Shean, near the Jordan border.

He did not say whether the drone was armed, but alleged it "was on a military mission sent by Iranian military forces" from an "Iranian base" in the Palmyra area.

Eight Israeli aircraft then "targeted the Iranian control systems in Syria that sent the UAV" and confirmed hits, Conricus said.

He said the aircraft met "massive Syrian anti-air fire", and the F16 later came down in northern Israel's Jezreel valley.

Damascus said its air defences repelled two Israeli raids on its military bases in central Syria, hitting more than one warplane during the first.

The Syrian Observatory for Human Rights, a Britain-based monitor, said Israel had targeted several bases in the east of the central province of Homs.

It said the bases are used by both Iranians and Russians deployed in support of the regime.

"Iran does not have a military presence in Syria, and has only sent military advisers at the request of the Syrian government," he said.

The statement from Iran, Russia and Hezbollah dismissed Israel's drone allegations as "lies".

Hezbollah in a separate statement said the F16's downing marked the start of a "new strategic era".

Danny Danon, Israel's ambassador to the UN, called on the Security Council "to condemn this dangerous act and to put an immediate end to Iranian provocations".

Speaking after meeting defence officials, Netanyahu reiterated that Israel would not allow Iran to establish itself militarily in Syria.

"Israel wants peace but we will continue to defend ourselves with determination against any attack on us and against any attempt by Iran to entrench itself militarily in Syria or anywhere else," he said.

"I reiterated our right and duty to defend ourselves against attacks from Syrian territory," Netanyahu said, adding that they agreed to continue their coordination on Syria.

The Kremlin said Putin had stressed the necessity to "avoid any measure that could lead to a dangerous escalation".

Netanyahu said he also spoke to US Secretary of State Rex Tillerson, who is about to embark on a visit to the region.

The US State Department said it "strongly supports Israel's sovereign right to defend itself", calling "for an end to Iranian behaviour that threatens peace and stability".

"Iran's calculated escalation of threat, and its ambition to project its power and dominance, places all the people of the‎ region -- from Yemen to Lebanon -- at risk," spokeswoman Heather Nauert said.

Netanyahu has spoken with Putin several times in recent months in a bid to persuade Russia to limit Iran's presence near Israel.