Ivanka Trump either had classified info or embarrassed herself to Korean president: MSNBC analyst 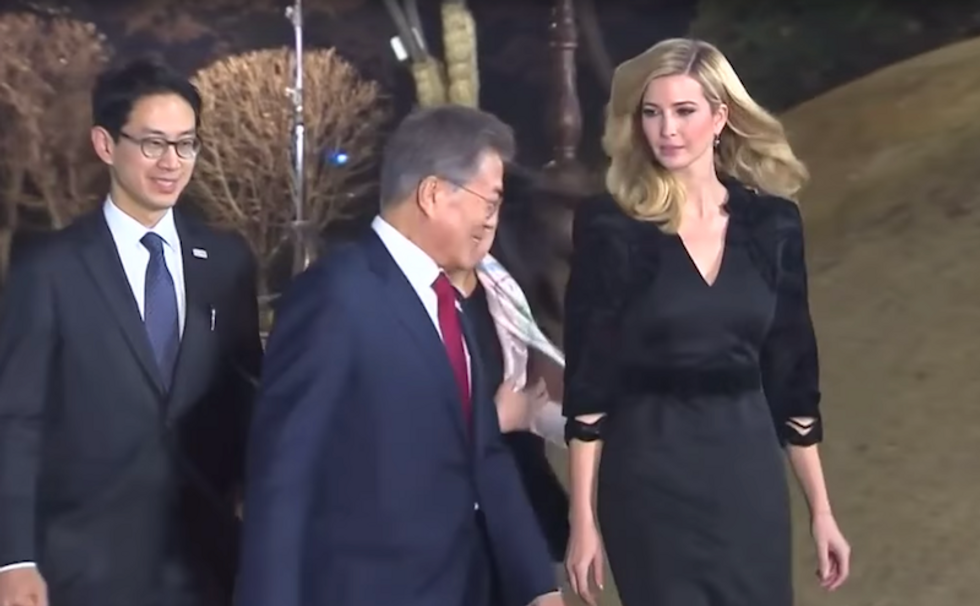 Ivanka Trump wasn't just in South Korea to throw shade at snowboarders. The president's daughter also "briefed" the president of South Korea on plans for sanctions against North Korea.

This is a problem because she doesn't have a permanent security clearance, noted analyst Chris Lu on MSNBC.

"It's significant on many different levels," says Lu. "We are left now with the wholly unqualified presidential daughter providing a briefing to the president of one of our major allies about economic sanctions. So one of two things happened. Either she got access to classified information in order to do the briefing, which would be improper, or she simply gave President Moon a briefing that he probably could have read about in a newspaper, and that's embarrassing."

The problem starts with the South Korean ambassador—or lack of one. Thirteen months into the new administration, the position still sits vacant because the nominee backed out over Trump's threats to attack the North. Since Trump doesn't have anyone qualified to take point on relations between the nations, he's sent his daughter, whose professional credentials include a fashion line sold at Macy's

.@ChrisLu44 just now on MSNBC, Ivanka Trump, "either got access to classified information in order to do the briefing, which would be improper, or she gave President Moon a briefing he probably could have read about in a newspaper. And that's embarrassing." pic.twitter.com/rhJnKeMAWv

Ivanka's access—or non-access—was defended by Treasury Secretary Steve Mnuchin, who said that the presidential first daughter was briefed on what he described as “largest set of sanctions ever imposed in connection with North Korea.

“Ivanka Trump has been briefed on this. She’s been part of the team,” Mnuchin said. “She had dinner with President Moon. They had a private discussion in advance about this occurring. And this has been an interagency process.”

Ivanka's husband Jared Kushner is under mounting pressure regarding his security clearance, which Chief of Staff John Kelly is reportedly looking to pull.