Jordan Klepper rails against NRA-supported politicians after Florida shooting: 'How do you even sleep? 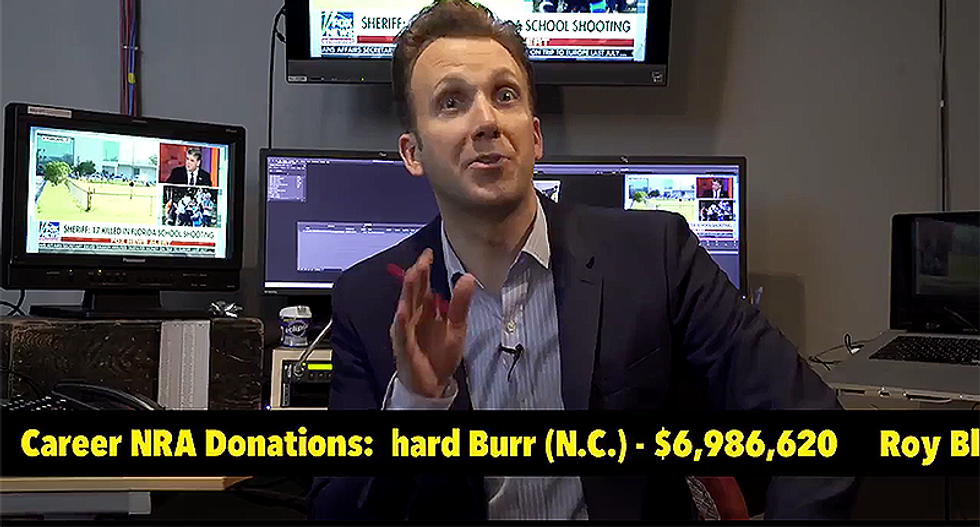 Jordan Klepper's Comedy Central show "The Opposition" is on hiatus this week, so the comedian took to video to do his own commentary about the shooting in Parkland, Florida.

Shouting directly into the camera like Alex Jones, Klepper had a crawl at the bottom of the screen listing political figures and the amount of money they've received from the NRA. The top of his list was Sen. John McCain (R-AZ), who has scored more than $7.7 million in NRA cash. Since the shooting Wednesday, the NRA has gone radio-silent.

“We’re taking a well-deserved break this week,” Klepper said. “Because sometimes, the most productive thing you can do is take some time off to think, to pray.”

He noted that his show is not the only group of people "taking a breather."

“The NRA has also gone completely silent since yesterday for some unknown reason," he said. "And these guys love to talk, tweet, bait, aggressively attack and especially donate to some of our favorite members of Congress.”

“Now, I’m glad you guys are taking a break,” Klepper told the NRA. “You work so hard, you do so much. I mean, honestly, how do you have time to sleep? I mean, seriously, NRA, how do you sleep at night? With everything that’s happening, how do you even sleep?”

While you've all been talking about #GunReformNow, the @NRA is taking a well deserved break... and @JordanKlepper has a very clear message for them and the politicians they support. pic.twitter.com/TOwUSJBaeb