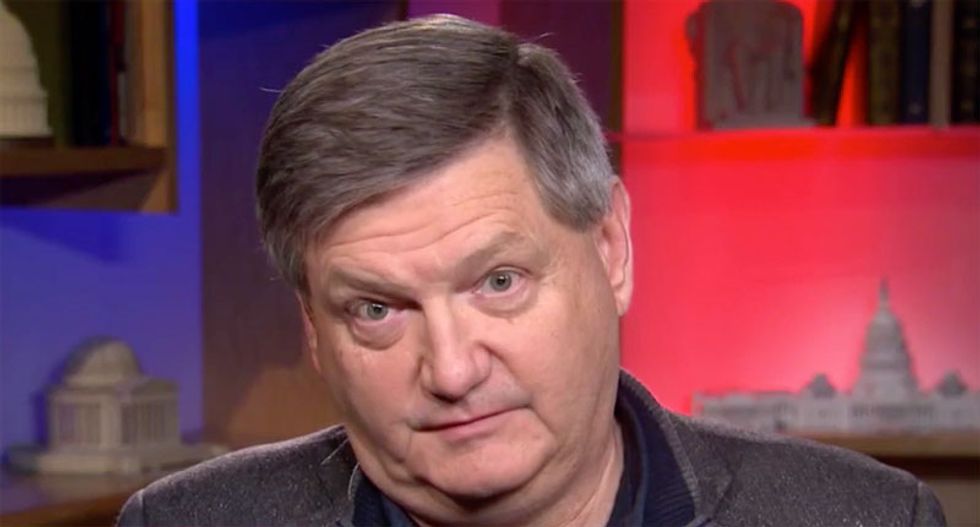 Jim Risen is the senior national security correspondent for 'The Intercept'

Pulitzer Prize winner James Risen explained to MSNBC's Chris Hayes on Friday how Russia's covert meddling in the 2016 presidential campaign was similiar to a KGB effort that sought to falsely blame America for the HIV-AIDS crisis.

"Real pleasure to have you here. You have been covering intelligence for literally decades, you've co-written a book with someone who worked at the CIA specifically about the KGB," Hayes noted. "Just start there with your knowledge how the KGB and successor agencies operated and how that looks, the indictment today and what we know about Russian interference with that history in context."

"The Russian interference in the 2016 election fits perfectly into the past history of the way the KGB has operated over the years," Risen explained.

"They are experts at covert action programs that are designed to inject disinformation into foreign countries," Risen continued "and one of the cold war cases that I talk about in the piece is called Operation Infection in the early 1980s where the KGB went to great lengths through cutouts and intermediaries and using, you know, unwitting news organizations, to spread the rumor and the false story that the United States was behind the HIV-AIDS virus -- and that had an insidious effect in the third world for a long time."

"It was kind of the precursor to fake news," he explained.

Risen also wondered what Vladimir Putin knew and when he knew it.

"I think one of the interesting things, there were East German scientists involved in spreading this rumor, at a time when Vladimir Putin was a KGB officer in East Germany and so it's very likely he knew about Operation Infection," Risen suggested.

"And he then later, as you know, became director of the FSB in 1998 even before he became President of Russia," Risen reminded. "So he has a long tradition steeped into the KGB's history of covert action."

"People dismiss it because it seems too much to contemplate, why is that to you the core question?" Hayes wondered.

"What all this is saying, was Donald Trump elected with the help of Russia?" Risen clarified.

"Did he cooperate with a foreign government to take control of the United States government? That to me is almost a textbook definition of treason, and if he did that, if collusion is proven, then I think almost by definition he's a traitor," Risen charged.

"I think everyone is afraid of the consequences of using that word because it's so fraught, but that is essentially what it is," Risen explained. "If you collude with an adversary of the United States to take over the government of the United States, you're a traitor."