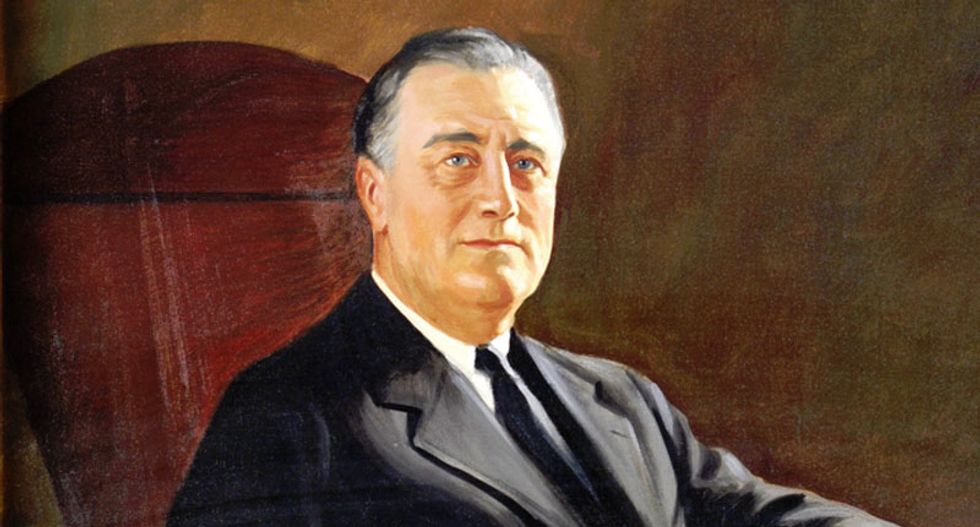 Franklin D. Roosevelt’s “infamy” speech to Congress asking for a declaration of war against Japan is among the most famous in American history. In that address, though, Roosevelt did not ask for a declaration of war against Nazi Germany. Hardly anyone now remembers FDR’s remarkable statement just one week later explaining why we were fighting Hitler.  It was to save the Bill of Rights.

On December 15th, 1941, the nation celebrated the one hundred and fiftieth anniversary of the ratification of the Bill of Rights as the first “Bill of Rights Day.” As part of that commemoration, the President delivered a ten minute radio address. These were Roosevelt’s first public comments since Hitler’s announcement—on December 11th 1941—that the Third Reich was at war with the United States. Thus, what FDR said that night was effectively our declaration of war on Nazism.

In his remarks to “Free Americans,” the President began: “No date in the long history of freedom means more to liberty-loving men in all liberty-loving countries than that fifteenth day of December, 1791. On that day, 150 years ago, a new Nation, through an elected Congress, adopted a declaration of human rights which has influenced the thinking of all mankind.” “Prior to the year 1933,” he continued, “the essentially validity of the American Bill of Rights was accepted everywhere at least in principle. But in that year 1933, there came to power in Germany a political clique which did not accept the declarations of the American bill of human rights.” “The entire program and goal of these political and moral tigers,” FDR said, “was nothing more than the overthrow, throughout the earth, of the great revolution of human liberty of which our American Bill of Rights is the mother charter.”

Roosevelt then gave his audience a grim account of life in Germany without the Bill of Rights. An individual “has no right to a soul of his own, or a mind of his own, or a tongue of his own, or a trade of his own; or even to live where he pleases or to marry the woman he loves.” Indeed, “his only duty is the duty of obedience, not to his God, not to his conscience, but to Adolf Hitler; and that his only value is his value, not as a man, but as a unit of the Nazi state.” “To Hitler,” the President went on, “the government, as we conceive it, is an impossible conception. The government to him is not the servant and the instrument of the people but their absolute master and the dictator of their every act.” “To Hitler,” he added, “the church, as we conceive it, is a monstrosity to be destroyed by every means at his command. The Nazi church is to be the National Church, a pagan church, absolutely and exclusively in the service of but one doctrine, one race, one Nation.”

The President vowed that this nightmare would not be America’s fate. “What we face, is nothing more nor less than an attempt to overthrow and to cancel out the great upsurge of human liberty of which the American Bill of Rights is the fundamental document.” “It is an attempt,” he told his listeners, “which could succeed only if those who have inherited the gift of liberty had lost the manhood to preserve it. But we Americans know that the determination of this generation of our people to preserve liberty is as fixed and certain as the determination of that early generation of Americans to win it. We will not, under any threat, or in the face of any danger, surrender the guarantees of liberty our forefathers framed for us in our Bill of Rights.” FDR concluded on this defiant note: “We covenant with each other before all the world, that having taken up arms in the defense of liberty, we will not lay them down before liberty is once again secure in the world.”

By placing the Bill of Rights at the heart of America’s cause for fighting Nazi Germany, President Roosevelt helped give the first ten constitutional amendments a special place in our national culture that they had not always possessed. Eleven years to the day after FDR’s declaration of war on Hitler, an original parchment from the First Congress containing what became the Bill of Rights was placed in the Rotunda of the National Archives alongside the original copies of the Declaration of Independence and the Constitution. At that ceremony, President Harry Truman—Roosevelt’s successor—explained that “the Bill of Rights is the most important part of the Constitution of the United States—the only document in the world that protects the citizen against his Government.”