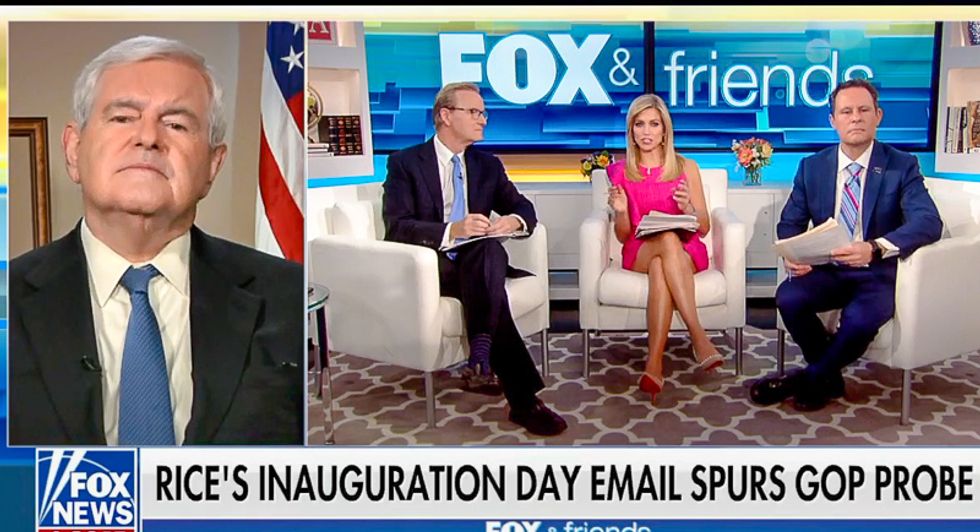 Former Speaker of the House Newt Gingrich (R-GA) on Tuesday told the host of Fox & Friends that they likely were wrong to suggest that an email sent by former National Security Adviser Susan Rice proved that she conspired against President Donald Trump.

The Fox News morning show latched onto the news that two Republican senators said they had questions about an email Rice sent herself on Inauguration day. The hosts and their guests -- with the exception of Gingrich -- found it particularly suspicious that Rice had quoted Barack Obama telling the FBI to proceed with the Russia investigation "by the book."

"What's your first take on why she would do something like this?" Brian Kilmeade asked Fox News contributor Andrew Napolitano during one of the show's segments on Rice.

"She's obviously trying to rewrite history," Napolitano opined. "She's trying to make it look as if something happened that didn't happen."

"My suspicion," he continued, "is that [the Obama team] learned something between Jan. 5 and Jan. 25 which would make them want to change the narrative about this meeting. None of us knew about the meeting... It's a private, secret meeting in the Oval Office. Suddenly, word comes out -- and why would 'by the book' be in quotations? Who would believe this?"

But the hosts of Fox & Friends were not counting on Gingrich taking Rice's side when they brought up the topic again the following hour.

"We've all been scratching our heads," co-host Steve Doocy told Gingrich. "We cannot figure out what Susan Rice was doing 15 minutes into the Trump administration on Inauguration Day when she wrote a memo to herself and emailed it, essentially saying that President Obama and other top law enforcement and FBI and DOJ people did everything by the book when it came to the Russia collusion meeting they had in the Oval Office."

Gingrich offered an innocent explanation: "It may have been there because someday she's going to write a memoir and she just wanted to have it."

Co-host Ainsley Earhardt reminded Gingrich that Rice had been accused of lying about Benghazi.

"For this, the timing of this is so bizarre," Earhardt said. "Why do you think she wrote this memo 15 days after the meeting? Notes from the meeting. And she kept saying, in her notes to herself, that the president insisted we do everything by the book?"

"Well, I'm guessing that she had taken those notes -- and this is a guess as a historian -- that she had finally gotten around to it, had a few extra minutes and thought she would capture it in a structured document," Gingrich explained.

"As she's cleaning out her office?" Earhardt asked.

"Right," Gingrich replied. "No, literally, I think -- I've had that happen to me -- I'll have some piece of paper from a meeting three weeks ago that I never quite got around to capturing in an email or putting into a file. It may well have been she was just tidying up."

"It's interesting you're giving her the benefit of the doubt," co-host Brian Kilmeade quipped. "That's very nice of you."