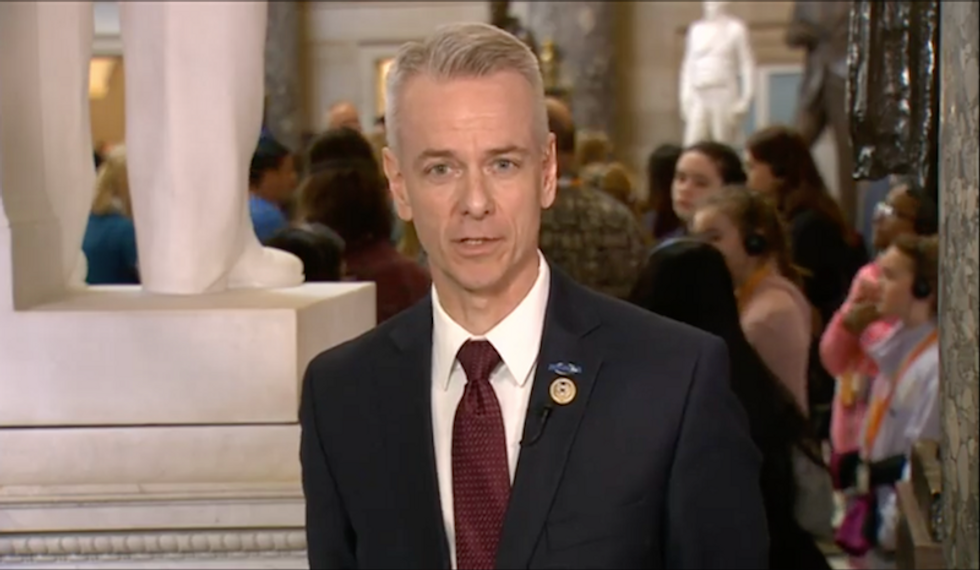 Oklahoma Republicans are ready to solve the school shootings—with Jesus and by eliminating violent video games.

"The first thing everybody wants to talk about is gun control," said Rep. Markwayne Mullin.

Instead, Mullin said it was important to look at "the whole situation."

Mullin—the owner of a successful plumbing business, who did not serve in the armed forces or in law enforcement—approaches the problem of school shootings "based experiences I've had in my life."

After the shooting, Mullin had an epiphany upon discovering that his two teenage boys played the first-person shooting game Call of Duty, which is set in World War II.

“I walked upstairs not too long ago. My two boys were playing Call of Duty with my brother-in-law and I looked at it for about three minutes and my palms were sweaty... the graphics are so real that that can't be good. I made them turn it off and they've never gotten to play it since,” said Mullin in a Facebook video made after the Parkland shooting.

"Hollywood elites they always want to go on about gun control, gun control, gun control, they're making millions and billions off exposing our kids, this generation, to violence and glorifying it," he said. "Games that are supposed to be entertainment are desensitizing out kids to the violence, what it's really like."

Fellow Oklahoma Republican Rep. Steve Russell of Oklahoma City, sent out a newsletter after the Florida high school shooting, which said that "we cannot get to a solution simply by going after the tools."

Russell, who owns a rifle manufacturing company, also used the same talking point: Hollywood liberals are to blame for school shootings, because of video games

“It means Hollywood not getting a pass to condemn such acts while perpetuating such behavior on the screen," he wrote. "It means our video gaming industry admitting that they may have a role in altering mental abhorrence to violence and the harming of innocents."

Russell also thinks that bringing Jesus into the classroom can help.

The solution, he wrote: "means our educators being willing to admit that resistance to our Judeo-Christian ethic in teaching respect and morality in the classroom has created untethered generations who struggle to identify what is right and wrong."