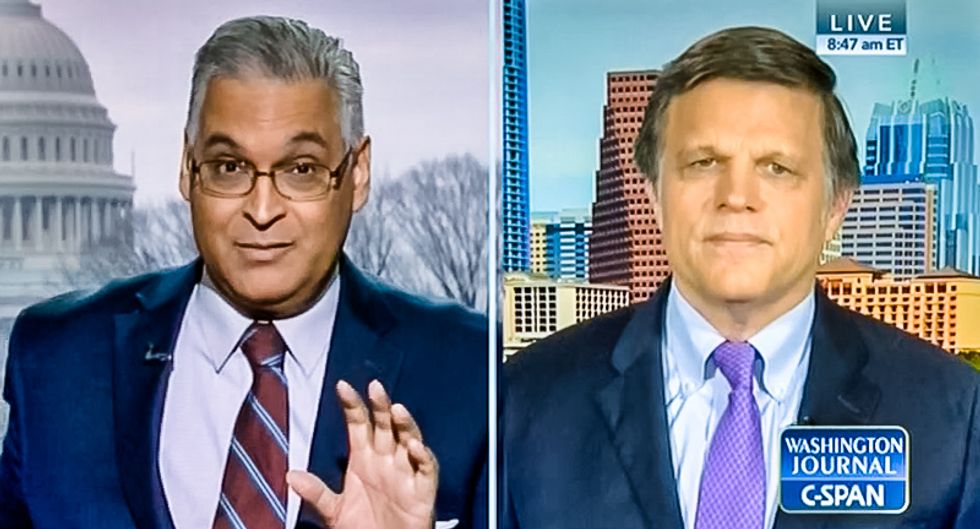 Presidential historian Douglas Brinkley made an example of a "raging" C-SPAN caller on Monday by using his rant as a lesson about how President Donald Trump has impacted national discourse.

During a President's Day appearance on C-SPAN's Washington Journal, Brinkley noted that President Donald Trump had lied a "mind-boggling" number of times during his first year in office.

"He's the Babe Ruth of lying," Brinkley explained. "There's no president that can even come close. He's in a category unto himself. Whether people find that's okay, that's the new norm. 'If he can get jobs back and I can get some tax cuts, I'm okay with this is a symbol of what the United States is.' I'm not. I find it problematic to have a president that routinely doesn't tell the truth."

"We're talking about a systematic respect for reality," he continued. "We need to make sure -- above all -- that a president has a sanity to them overall. And there are times when Donald Trump swings pretty far off what we call the zone of normalcy. He goes off into very weird tangents that can be disturbing."

"He is not even wanted in Great Britain right now," Brinkley later noted. "These are problems. This is somebody who -- that kind of tone-deaf narcissism that our president has that he's not able to try to find the way to heal the country is another shortcoming of Donald Trump, I'm afraid... He goes too quickly to do tweets that seem to be self-aggrandizing for himself and belittling somebody else instead of doing true Judeo-Christian healing."

As if to make Brinkley's point, a Trump supporter named David called with an unhinged racial rant.

"David, I disagree with every point you've made," David said, getting Brinkley's name wrong. "You're really saying everyone else in the country that voted for Trump are the incurables is what you're saying."

"The people who put Barack Obama in office were the white people!" the caller ranted. "And Barack Obama spent -- I can name 20 things where he kept poking his finger in the eye of the United States with [Army soldier Bowe Bergdahl], with the other guy [Chelsea Manning] that he gave the sex change. With everything that he's done, the racial things that he's divided the whites and blacks so much in this country, it's not funny. Because all of the sudden, they were alright. Bringing Mexicans into this country."

At that point the C-SPAN host cut off the caller.

"We've had a number of callers and you can feel the civility," Brinkley said, referring to previous callers. "And then you get a caller like that, just like raging. Like a Tasmanian devil coming on the air and just saying all sorts of things. That's what we're talking about. That kind of always having to be incendiary and putting logic and reason and compassion and intelligence -- backburnering those. And instead, a sense of rage."

Brinkley explained that the caller's rage "has been the formula that's worked for Trump and has brought in his supporters."

"We do need to make America great again," the historian said. "But what I'm objecting to is the way Trump goes about it by trying to divide and conquer. And our caller is saying that Barack Obama did the same tactics so now it's payback. I just never found President Obama's tone towards fellow Americans in a consistent way as demeaning and belittling as the way that Donald Trump talks to our fellow Mexican-Americans or LGBT people, African-Americans, women."