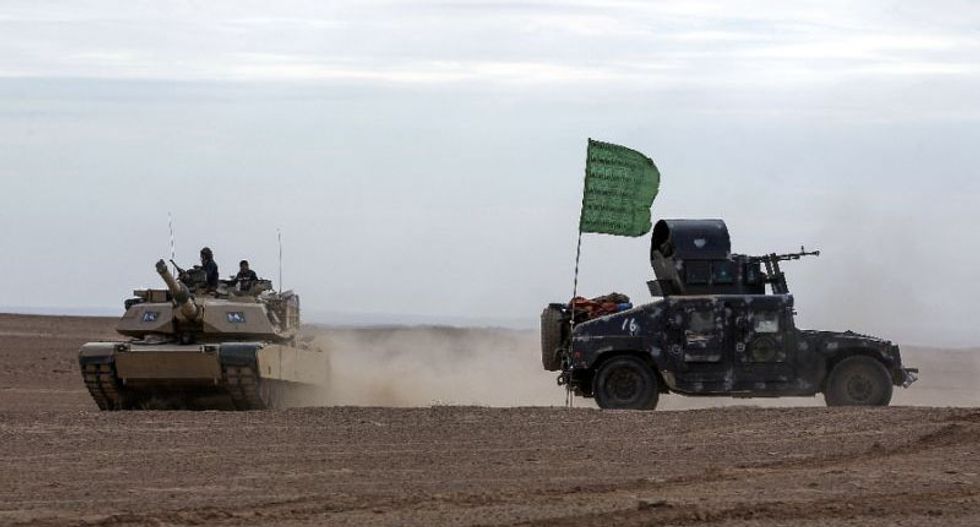 The Pentagon acknowledges that Hashd al-Shaabi, a pro-Iranian Iraqi paramiltary group pictured here in the desert bordering Syria, used US M1 Abrams tanks that had been sold exclusively to the Iraqi army (AFP Photo/AHMAD AL-RUBAYE)

US Abrams tanks sold to Iraq have been used by a pro-Iranian paramilitary group in fighting against the Islamic State group in Syria, the Pentagon said Friday.

The tanks, however, were later returned to the Iraqi military, Pentagon spokesman Eric Pahon said.

M1 Abrams tanks have been sold to Iraq over the past decade, Pahon said, but Washington "has not provided defense articles to the Shia Popular Mobilization Forces (PMF), which are part of the Iraqi Security Forces (ISF) by law."

The PMF, or Hashed al-Shaabi, is a paramilitary group with close ties to Tehran, and was actively engaged in combat against the IS in Syria.

"We have discovered incidents where some US origin equipment, including M1 Abrams tanks, came into the possession of certain PMF groups. This equipment was subsequently used by these groups" in the fight against the IS jihadists.

"All of these tanks were recently returned to Iraqi Security Forces custody," Pahon said.

Backed by a US-led coalition, Iraqi forces have gradually retaken all territory lost to the jihadists.

Iraq's parliament considers the PMF to be a state force operating within the framework of the constitution.

The various forces within the Hashed -- established in 2014 following a religious call for Shiites to take up arms against IS jihadists -- have between 60,000 and 140,000 fighters.

Washington remains wary of Tehran's influence over those units.

"We will continue to screen and vet all forces that receive US-origin defense equipment ... to ensure that this equipment remains in the possession of the designated end-user," Pahon said.

The spokesman also denied press reports that the Abrams manufacturer, General Dynamics, had canceled its maintenance contract with Iraq.