'He refers to his accomplishments like they're choices at a gas station': Seth Meyers blasts Trump's bizarre 'promises plus' slogan 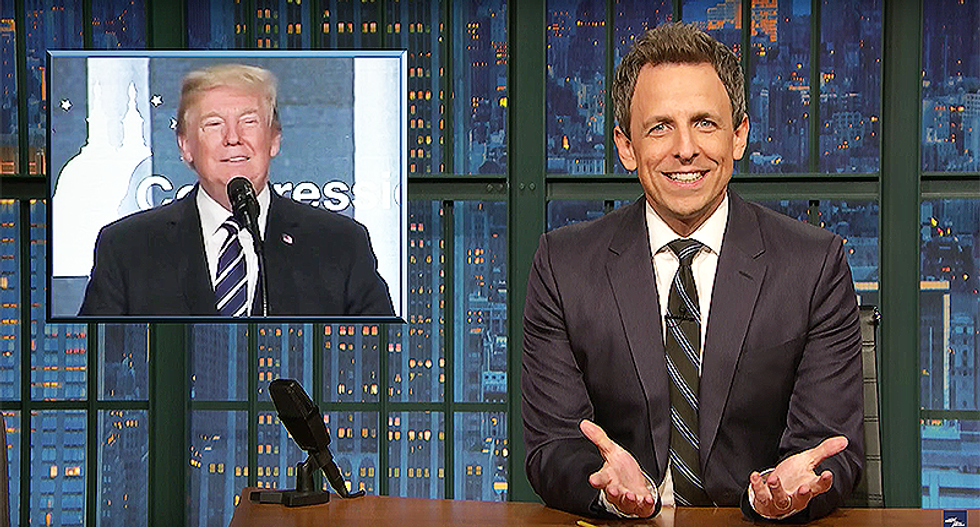 During the speech, Trump forgot that he'd just said Sen. John Cornyn's (R-TX) name and then, less than 30 seconds later criticized the name not being on his list.

"It makes sense that Trump has the memory of a goldfish, since he also has a mouth like one," Meyers joked. "This is starting to feel like the last season of a long-running TV show when the writers decide to have the main character fall off a horse and get amnesia. 'Hi, I'm Donald.' 'Hi, Donald. I'm John.' 'Who's Donald!?'"

His speech began by basking in the glow of his own praise. He talked about his promises, which he said were "far more promises than we promised. We have seriously fulfilled promises. I call it promises-plus."

It was unclear what he meant by that, but Meyers said Trump "refers to his accomplishments like they're choices at a gas station. 'We have promises, promises plus and promises unleaded.' Just don't get them near a match."

Meyers went on to discuss special counsel Robert Mueller and the possibility that he might question Trump. He brought up the shocking news that Trump demanded a loyalty oath from Deputy Attorney General Rod Rosenstein by asking if he was on Trump's "team."

"Oh my God, Trump is so obvious," Meyers said. "If you met Trump on Tender and messaged him 'Hello,' his response would be, 'What size bed do you have?'"

Vice President Mike Pence tried to pretend there is nothing to hide. In an interview with Politico, Pence said that he's always believed in transparency and he will always "stand by that principle."

He then played the clip of Pence's shaking his head in the upper left of the screen. Over and over, Meyers asked the shaking Pence head if he would release information requested by open records advocates. Information like the White House visitor's logs, the emails pertaining to the Russia-Trump Tower meeting, even Eric Trump.

Meyers couldn't help but mock Carter Page's knack for smiling while he admitted to sketchy activity. He noted it's not unlike if your golden retriever destroyed your couch.

"Hey, y'all! Come and look what I did! Come on! It's really cool! I crapped in your shoes too!"