'He relayed that statement to me': Sarah Sanders melts down when asked why Trump won't condemn wife abuse 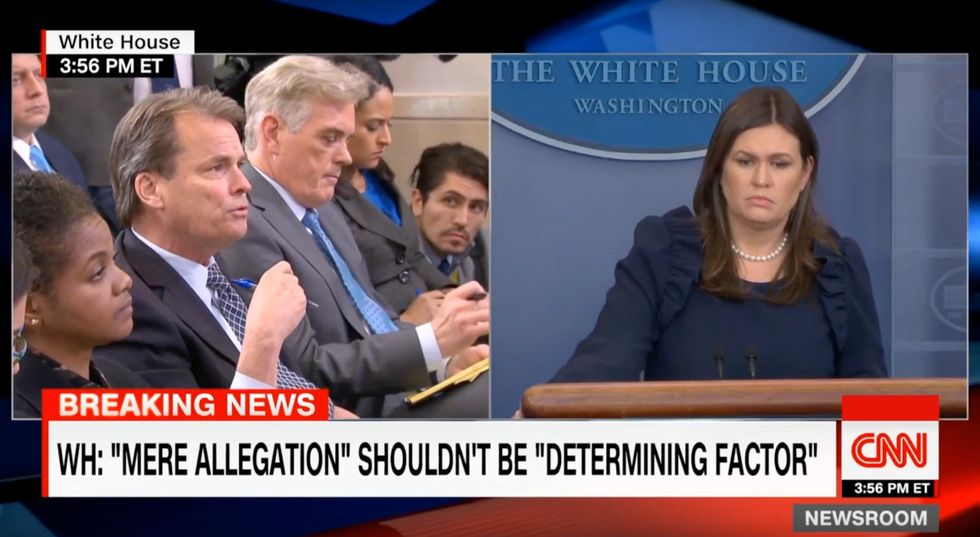 White House Press Secretary Sarah Huckabee Sanders on Monday insisted that the Trump administration did not have to publicly speak out against domestic violence because he had "dictated" statements on the matter.

During Monday's White House press briefing, Sanders defended the White House's handling of the resignation of Rob Porter, who was accused of abusing two ex-wives.

Why haven't we heard the president say what you said right there, that he takes domestic violence very seriously?" ABC Correspondent Cecilia Vega asked Sanders.

"I spoke with the president and those are actually his words that he gave me directly today," Sanders insisted. "It's my job to speak on behalf of the president. I spoke to him and he gave that message directly to me and I read it directly to you."

Another reporter noted that Vice President Mike Pence had called the allegations against Porter appalling, yet Trump had not personally spoken out.

"Why not use this as an opportunity to say something like that?" the reporter wondered. "Why does he have to speak through you?"

"The president has ben clear multiple times through myself and others in the administration that we condemn domestic violence," Sanders opined.

"He has not said it," the correspondent pressed. "Why has he not said it?"

"I'm the spokesperson for the White House and the president," Sanders shot back. "And I'm saying it to you right now."

"Why do you have to say it?" the reporter asked again. "Why can't he say it?"

"I'm not sure how I can be any more clear," Sanders replied. "The president has espoused his views on this and I certainly have echoed them for everyone."

"He said that he wishes Porter well and people should have due process," the correspondent pushed on. "But he hasn't addressed the victims of domestic violence."

Sanders argued that a statement she read from the president served as his personal condemnation of domestic violence.

"He literally dictated that statement to me," she said. "And so I'm not sure how that's not the president speaking."